It’s a common enough Hollywood trope that we’ve all probably seen it: the general, chest bespangled with medals and ribbons, gazes at a big screen swarming with the phosphor traces of incoming ICBMs, defeatedly picks up the phone and somberly intones, “Get me the president.” We’re left on the edge of our seats as we ponder what it must be like to have to deliver the bad news to the boss, knowing full well that his response will literally light the world on fire.

Scenes like that work because we suspect that real-life versions of it probably played out dozens of times during the Cold War, and likely once or twice since its official conclusion. Such scenes also play into our suspicion that military and political leaders have at their disposal technologies that are vastly superior to what’s available to consumers, chief among them being special communications networks that provide capabilities we could only have dreamed of back then.

As it turns out, the US military did indeed have different and better telephone capabilities during the Cold War than those enjoyed by their civilian counterparts. But as we shall see, the increased capabilities of the network that came to be known as AUTOVON didn’t come so much from better technology, but more from duplicating the existing public switched-telephone network and using good engineering principles, a lot of concrete, and a dash of paranoia to protect it.

The world’s militaries have always been early adopters of technology, eager to put the latest scientific and technical advances to use for their dual missions of national defense and projection of political power. This is particularly true of communications technologies, with the telegraph, telephone, and radio communications being quickly adopted by militaries between the mid-1800s and the early 20th century, and the US military was certainly no exception.

Most of the connections between US military bases before the 1930s were dedicated lines, with some leveraging of the growing public switched telephone network. But with mobilization for World War II and the subsequent Cold War period leading to a massive expansion of the geographic footprint of the military as well as an increased number of users, military planners saw the folly of relying on the civilian telephone system that was even then experiencing its own growing pains. By the early 1960s, it was clear that a phone system dedicated to and specialized for the use of the military was a national security priority.

The designers of what would become known as AUTOVON or Automatic Voice Network faced a conundrum. The civilian long-distance phone network, which was undergoing a massive buildout at the time, was almost exactly what they needed to provide for the military. But they also knew the limitations of the public telephone network, a system that military planners were certain could collapse under the weight of a panicked populace rushing to the phones to contact loved ones during a national emergency. That precluded leveraging the existing network for the military, so the decision was made to build a second long-haul telephone network, dedicated to military use but mirroring the civilian network in architecture and adding features needed by the military.

Like the AT&T Long Lines system that it essentially duplicated, AUTOVON was laid out as a series of long-haul connections that hopscotched across the country. But while the civilian system was designed to hop from city to city and provide service to the maximum number of paying customers, AUTOVON used what was known as “avoidance routing” to build a hardened network.

AUTOVON switching sites were placed safely outside the range of a nuclear attack on any major population center, to ensure their survivability. For instance, Pottstown, Pennsylvania was chosen as an AUTOVON switching site on the transcontinental route from New York to Los Angeles. It was linked to the important naval facilities in Philadelphia, about 35 miles to the southwest, by coaxial lines and microwave links.

Connections between AUTOVON sites were mainly via buried coaxial cables. Much of this cable was directly in the ground rather than encasing it in concrete, as that was deemed sufficient to protect the cable against anything short of a precision attack. Concrete conduits were, however, used to protect sections of the AUTOSEVOCOM, or Automatic Secure Voice Communications network, a parallel military communications network that was designed to pass only encrypted traffic.

Many of the AUTOVON main stations, like the previously mentioned Pottstown station, were equipped with massive underground spaces to house all the telephone switchgear. Burying the buildings was an attempt to protect them from all kinds of disasters, although the details of the structures make it clear what the designers had in mind. The buildings were linked to the surface by shafts with reinforced blast doors, there were massive ventilation fans and filters to provide positive pressure, and diesel generators could provide half a megawatt of power to keep the facility running. Add to that the fact that all the equipment was mounted on shock-absorbing springs and the AUTOVON sites would have been a great place to ride out a nuclear attack.

Aside from its avoidance routing and the reinforced bunkers at its main stations, the AUTOVON network was almost identical to the civilian telephone network of the time. Like its civilian counterpart, it was a circuit-switched network, meaning that it was designed to establish a fixed physical path between the sender and receiver and maintain it for as long as required. As such it used much of the same switchgear used by the civilian system, initially using the same crossbar switching gear that had been in use since the 1940s. Later, the crossbar switching gear was swapped for electronic switches, which enabled some of the special features that AUTOVON became known for. 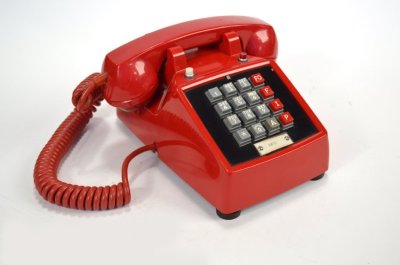 “Get me the president.” An AUTOVON phone in “Hotline Red” with the extra column of Touch-Tone keys. Source: AUTOVON.org.

One of the shortcomings of the circuit-switched civilian network is that once a connection is established, it stays connected until one or the other party ends it. Outgoing circuits are a limited resource, though, and once all the circuits are in use, calls cannot go through. In a time of emergency, it wouldn’t do to have a soldier’s call home to his sweetheart prevent a base commander from receiving an order from the Pentagon, and so a system to prioritize and override calls was devised.

Dubbed multilevel precedence and preemption, or MLPP, the scheme provided five levels of precedence. The lowest precedence level was Routine, which comprised the bulk of AUTOVON traffic. Above that was Priority, followed by Immediate, Flash, and finally Flash Override, theoretically to be used only by those with direct permission from the president. AUTOVON phones accessed the MLPP system using a fourth column of buttons on special 16-key Touch-Tone keypads. The four extra buttons were used to assign one of the higher precedence levels to the call by pressing the corresponding key prior to dialing the rest of the number. There was no key for Routine-level calls since that was the system default.

If a precedence level was assigned to a call and there were no outgoing circuits available, the MLPP system searched for a circuit occupied by a lower precedence call and immediately disconnected it. Call participants would hear a characteristic fast busy tone to let them know they had been bumped. If an outgoing priority call was made to a number that was engaged in a call with lower precedence, the original connection was broken to let the higher precedence call through.

The Packets Are Coming

Construction of AUTOVON began in 1963, and the system went into service at military bases throughout the country in 1966. Three years later, AUTOVON switching stations had been built in Europe, Japan, Korea, the Middle East, and in the Caribbean. Eventually, there were about 70 sites in the system, providing the bulk of non-secure communications for the US military and allied forces around the world.

But even as the initial system was still being rolled out, a little project in the Advanced Research Projects Agency was in the works that would plant the seeds of AUTOVON’s eventual demise. The project was ARPANET, the first serious packet-switched network, which would lead to the Internet and make almost everything about AUTOVON obsolete. It would still take almost another 30 years for the final pieces of AUTOVON to be retired, though, which is a testament to the staying power not only of circuit-switched networks but also of great engineering.