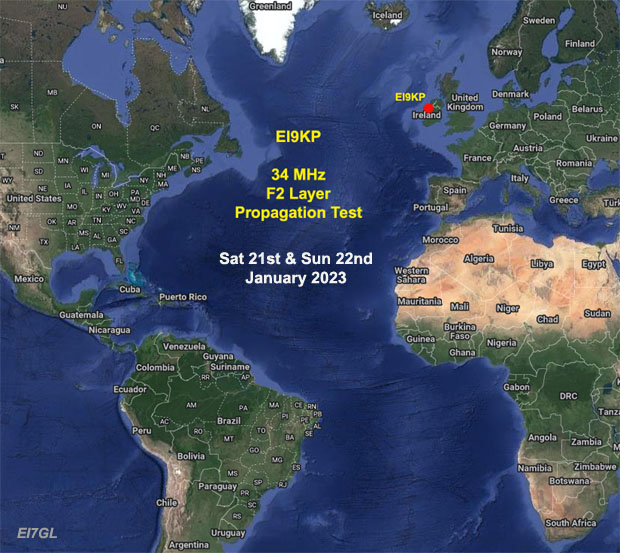 Phil, EI9KP has announced that he will be carrying out test transmissions on the 34 MHz band (9m) band on Saturday the 21st & Sunday the 22nd of January 2023. The beacon will operate from 11:00 until 17:15 UTC on both days. The purpose of these tests is to investigate F2 layer propagation.

EI9KP will be transmitting on 34.013 MHz. The sequence of the beacon will be 2 x FT8, 2 x CW ID & Locator, short carrier.  The 2 x CW part is to help SWL’s who do not use digital modes and also help during QSB cycles.

The beacon will be GPS disciplined with an output power of 1-watt. The antenna is a horizontal dipole with capacity hat loading. 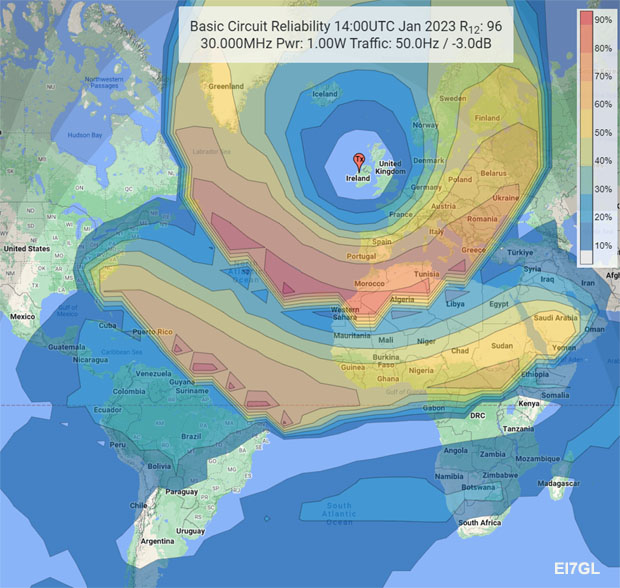 The map above shows the predicted coverage area for a 1-watt FT8 transmitter operating at 30 MHz. It’s not quite 34 MHz but it’s close.

It clearly shows the first F2 hop going from Ukraine, Romania, Bulgaria, Greece… to the far south of Italy and perhaps the far south of Spain and Portugal. The path to the Canary Islands looks particularly good.

To the west, the first F2 hop includes Newfoundland and the recent tests confirm this. Phil writes… “Larry VO1FOG reports receiving the beacon at 12:42UTC (his email time stamp) and all the way through till sunset, which for my QTH was 16:48UTC.  F2 layer propagation.  He reports that the signal was particularly strong about half an hour before sunset, to disappear all together at sunset. He reported a similar signal peak yesterday, just before sunset.”

It’s possible the second F2 payer hop might reach parts of the Caribbean and the SE of the USA.

Reports to EI9KP on QRZ or you can leave a comment here.

Note that it may be possible for stations in western Europe to hear the signal via backscatter. Leave your radio on 34.0122 MHz USB and see if you can get a decode of the FT8 signal.