From October 24 till October 31, 2020, the Club of radio amateur-aviators “Knight of the Sky” holds days of activity devoted to the 95th anniversary of Henry Vasilyevich Novozhilov – Soviet and Russian aircraft designer, Doctor of Technical Sciences, Professor, Academician and Corresponding Member of the Academy of Sciences of the USSR and RAS.

The Club Council established the diploma “continuer of IL epoch”. 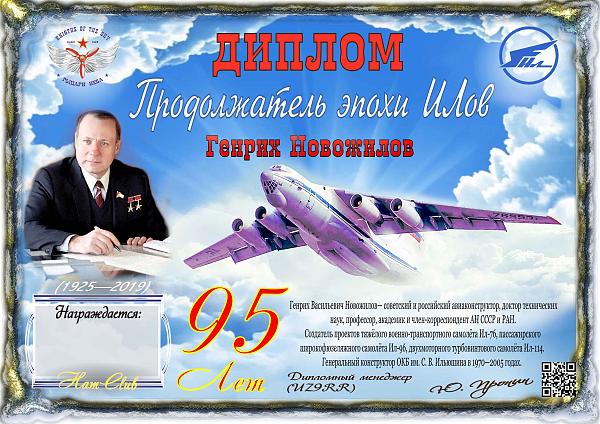 Genrikh Vasilyevich was born on October 27, 1925, in Moscow in a family of servicemen. His father, Vasily Vasilyevich (1900-1987), was a military engineer, mother of Iraida Ivanovna – a serviceman.

During the Great Patriotic War until August 1942, he was evacuated to Penza, where he finished nine classes. Upon returning to Moscow, he worked at the Physics Department of the Moscow Aviation Institute (MAI), and since 1943 – a student of the Aircraft Faculty of MAI.

In 1949, after graduating from the MAI, he worked at the Design Bureau of S.V. Ilyushin. In 1956-1958, Novozhilov was the secretary of the party committee of the plant, then Deputy Chief Designer of IL-18, in 1964 – First Deputy Chief Designer, headed the organization of serial production of IL-62, for which with a group of design bureau employees became a laureate of the Lenin Prize in 1970.

After the retirement of Academician S.V. Ilyushin, from July 28, 1970, he was the General Designer of the Design Bureau of Moscow Machine-Building Plant “Strela”. In 1984, Novozhilov was elected a full member of the USSR Academy of Sciences for the department of mechanics and control processes. Under the leadership of Heinrich Vasilyevich such aircraft as IL-76, IL-86, IL-96-300, and IL-114 was created. Then he worked as a General Designer, Chairman of the Board of Directors, Chief Advisor to the General Director of PJSC “Ilyushin Aviation Complex”. Lately – Honorary General Designer of PJSC “Ilyushin Aviation Complex”.

He died on April 28, 2019. He was buried at the Federal Military Memorial Cemetery in Moscow.

To get the diploma you need to score – 95 points.

For the above correspondents, a multiplier for the following types of radiation is introduced:

QSO with club members is counted daily (by UTC). Repeated communications – on different bands, on one band – different types of radiation.

The diploma in electronic form is free through https://nebo.hamlog.ru/

Or through a resource  http://hamclub.ru/rycari.php