From December 19 to December 27, 2020, the club of radio amateur aviators “Fifth Ocean” holds activity days, dedicated to the day of distant aviation of Russia.

The date of establishment of long-range aviation is December 23, 1914, when Emperor Nikolai II approved the decision to create a squadron of airships “Ilya Muromets”. By April 1917 the squadron included four combat units and about 20 bombers. By the Decree of the Soviet of People’s Commissars of March 22, 1918, it was ordered to form a Northern Group of Airlift “Ilya Muromets”. Thus began the rebirth of long-range aviation in the RSFSR.

In 1940 the Long-Range Bomber Aviation of the Main Command of the Red Army (DBA GK) was created, and the departments of the special-purpose armies were disbanded. By mid-1941 the DBA GK included five air corps, three separate air divisions, and one separate aviation regiment: a total of about 1500 aircraft (13.5% of the total aircraft fleet of the Red Army Air Forces) and almost 1000 combat-ready crews. By a decree of the GKO of March 5, 1942, long-range aviation was transformed into Long-Range Aviation (LRAA) reporting directly to the Supreme High Command. On the basis of the 18th Air Army the Council of Ministers of the USSR decree of April 3, 1946, created the Far-Range Aviation of the Armed Forces of the USSR. The Long-Range Aviation included air armies with offices in Smolensk, Vinnitsa, and Khabarovsk. TU-4 bomber which entered into service in 1948 became the first Soviet carrier of nuclear weapons. In 1954, the first Soviet long-range jet bomber Tu-16 entered service of the Long-Range Aviation.

As of January 1, 1958, long-range aviation had 1,120 Tu-16 jet bombers and 778 Tu-4 piston bombers in service. The Russian Far East Air Forces currently fly strategic missile-carrying bombers Tu-95MS and Tu-160, as well as long-range Tu-22M3 bombers. The formations and units are based all over Russia.

Long-range aviation today is the main strike force of the Air Force and the strategic reserve of the Supreme High Command. The main task of this structure of the Russian Federation is to destroy enemy military facilities at a long distance from the basing sites. Long-range aviation also conducts strategic and operational aerial reconnaissance.

Long-range aviation is one of the most important branches of the Air Force of the Russian Federation. It includes strategic bombers, tankers, and missile bombers. Today the personnel of long-range aviation stands guard over the air borders of our country, improving professional skills, successfully mastering the combat vehicles of the XXI century. The current generation of aviators keeps and increases the legendary traditions of their predecessors, and is ready to continue to perform all tasks clearly and efficiently.

December 23, 2020, is the 106th anniversary of the Day of Long-Range Aviation of Russia. It is a professional holiday for the flight crews: pilots, navigators, flight mechanics, and ground service workers, all those involved in the Russian Far East Aviation.

In honor of this event, the Amateur Radio Operators Club “The Fifth Ocean” holds activity days from December 19 2020 till December 27, 2020. A diploma “Day of Long-Range Aviation” dedicated to the event is established. 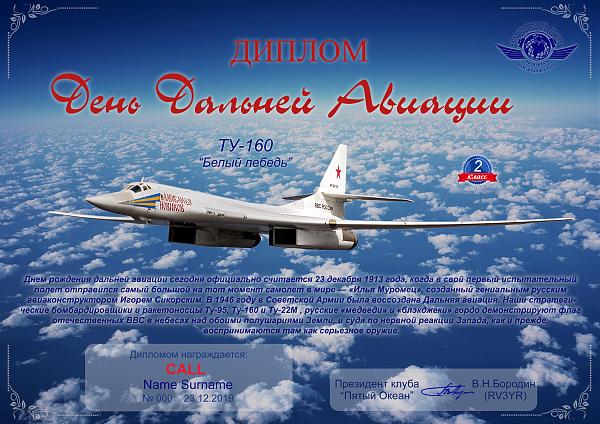 Conditions for the “Day of Long-Range Aviation” diploma

The diploma is valid every year.

The order of scoring:

The multiplier for applicants, depending on Regions:

Repeated QSOs are only allowed on different bands and different types of radiation.

All types of digital communications (RTTY, PSK, MFSK, SSTV, JT64, FT8, etc.) are counted as one type of DIGI.

Activators, members of the “Fifth Ocean” club, a diploma numbered “A”, is issued according to the number of QSOs made on the activity days:

A prerequisite is confirmation of QSO on the resource https://hamlog.ru

The diploma is issued free of charge in electronic form through the resource  https://aviaham.hamlog.ru/diplom/.

Fifth Ocean club members, on and after their activity days, may receive a diploma as applicants in the general procedure.