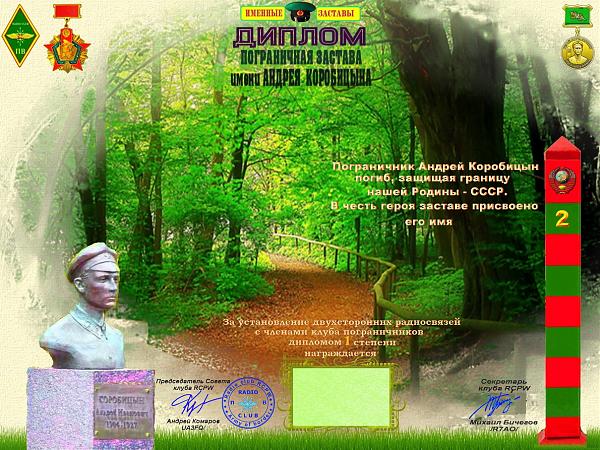 А. I. Korobitsyn was born in 1904 in the village of Kurakino, Totemsky u. Vologda sponge in a large family of a poor peasant.

In 1926 he was drafted into the Red Army and sent to the Sestroretskaya frontier post of the Leningrad Military District. On the night of October 21, 1927, Komsomol member Andrey Korobitsyn joined the outfit. Bypassing his station, he noticed four violators, who had moved from Finland to the USSR territory. The brave border guard came into an unequal battle with them. Deadly wounded, he was able to block the way to the enemies.

The Soviet government praised the hero’s feat. The outpost where the frontiersman served was given his name; he was forever enrolled in the lists of the outpost.
In 1928, by the decision of the Presidium of the All-Russian Central Executive Committee, the hero’s homeland was renamed Korobitsyno village, and Kurakinsky village council of Siamzhensky district was renamed Korobitsyno village.
On October 20, 1957, on the border of Sosnovsky and Vsevolozhsky districts of Leningradskaya oblast, on the place of the former USSR state border, where the border guard was fighting with violators, a monument to an obelisk was opened. The words are engraved with gold on the granite: “Here, on October 21, 1927, border guard Andrey Korobitsyn made a heroic feat defending the USSR border”.

On August 26, 1966, the bust of the hero was installed in his homeland in the village Korobitsyno.

In this connection, the RCPW club spends days of activity devoted to the hero Andrey Korobitsyn. It is a good opportunity to fulfill the established diploma.

To get the basic diploma it is necessary to gain 100 points for work with RCPW club members on any allowed ranges, starting from 00:00 UTC on November 27, 2020. For communication with an RCPW club member on days of activity 5 points will be charged. In the future – 3 points. Repeated communications are counted on different EF (VHF) bands, on one band – different types of modulation (all types of DIGI are counted for one).

To get the 1st-degree diploma in the days of activity it is necessary to communicate with 25 members of the RCPW club on any allowed EF (VHF) ranges by any modulation. In the future, it is necessary to carry out communications with 50 members of the RCPW club. Repeated connections with one and the same club member are not counted for this diploma.
Diplomas are free and are issued electronically through the service https://hamlog.ru/ on the basis of uploaded logs of RCPW club members. Members of club RCPW receive the basic diploma at carrying out and loading on https://hamlog.ru/ 200 QSO and the diploma of 1 degree for 300 QSO or on the general bases. Both diplomas are given to SWL observers on similar conditions. The observers submit applications to the club secretary’s address  R7AO@mail.ru