City Makeevka (until 1931 – Dmitrievsk) was founded in 1690. The history of the city begins with the Cossack settlements Yasinovka, Lower Krynka, Zemlyanka, Makeevka, Shcheglovo, located at the junction of Ekaterinoslav Province and the Don Army, when by decree of the Azov Province Chancellery old-timer Zaporozhye Zemlyanka settlement was transformed into a state military settlement. In 1787 was founded Sloboda Makeevka, which in 1815 became the center of the newly created parish of the same name. By the early ’90s of the XIX century on the territory of Makeevka parish, in connection with the discovery and beginning of industrial development of coal deposits, formed Makeevka mountain area and its administrative, commercial, industrial, and cultural center – Dmitrievsky village, which eventually became the basis of the city Makeevka. In July 1917, Dmitrievsky settlement received the status of a city and became the center of Makeevka district. In February 1919 Makeevka district was included in the Donetsk province. In April 1922 the district, as a territorial administrative unit was abolished, and the entire executive power went to the City Council. In 1931 the city of Dmitrievsk was renamed Makeevka. Makeevka is a city with an ancient history. On the territory of Makeevka, 140 archeological monuments were found, among which one of the oldest in Ukraine – stone chisel from the early Paleolithic era. There are 3 settlements and 137 mounds, left by nomadic peoples: Scythians, Sarmatians, Polovtsians, etc., in the city. In the middle of the 19th century, coking coal deposits were discovered in Makeevka. The first mine was built in 1859. By the 90s of the XIX century. Makeevka mountain area with a developed network of coal enterprises, which in 1904 was reorganized into a mountain district. In 1907 the first in Russia district mining rescue station was opened. On the basis of coal mining developed railway transport, metallurgy, pipe foundry, and coke industry. The rapid development of the city, its industrial strength is associated with the pre-war decade. In Makiivka, the first domestic mechanized blast furnace and blooming furnace were built at the metallurgical plant; the only research institute in the country for the safety of mining operations was opened, etc. By 1941, there were 60 enterprises operating in the city. Makeevka produces 12% of all-Union coal mining and 10% – metal melting. During the Second World War, the city was destroyed, its economy suffered huge damage. More than 30 thousand civilians were killed by mass shootings and hanging. 15 thousand were forcibly taken to Germany, 16611 soldiers and officers were killed at the fronts. 64 citizens of Makeevka were awarded the title of Hero of the Soviet Union for heroism and courage. Decree of the Presidium of the Supreme Soviet of the USSR on September 6, 1977, for the great success achieved by the workers of the city in economic and cultural construction, active participation in the fight against the Nazi invaders and during the Great Patriotic War, and in connection with the 200th anniversary of the founding (then the date of foundation was considered the year 1777), the city of Makeevka Donetsk region was awarded the Order of Red Banner of Labor.

The city confirmed its individuality once again in 2010 when the largest sun clock in the CIS was installed here.

The sun clock in Makeevka is located on the square in front of the Palace of Children and Youth Creativity. Architects from Makeevka and Donetsk worked on its creation. The diameter of the clock is 16 meters, and the weight of a four-meter gnomon (a special rod in the center of the clock, which casts a shadow) – 500 kg.

Makeyevka’s watch was assembled with small details in mind. The rod or gnomon is mounted parallel to the Earth’s axis and points to the Polar Star. The wind rose with its hands indicated the sides of the world. And on the dial, in addition to numbers are the signs of the zodiac. 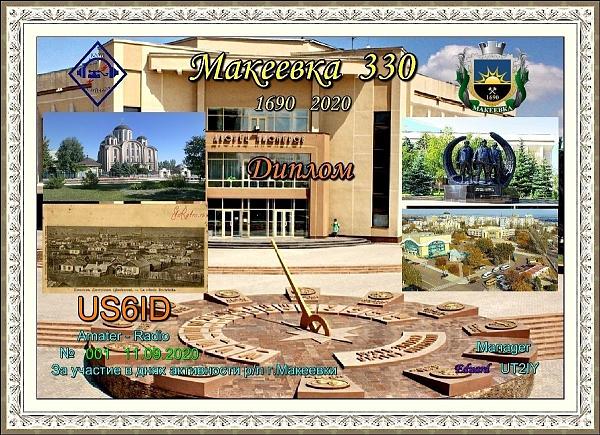 Radiocommunications conducted on all TV and VHF bands will be counted for the diploma.

You need to gain 330 points for the diploma.

For one QSO with the radio amateur of Makeevka 30 points are charged.

Double the points for 160m and VHF connections.

Repeated QSO/SWL are resolved on different bands, and on one band by different types of radiation: CW, PHONE, DIGI (all digital types are counted for one type).

Diploma applications in the form of an extract from the hardware magazine in any form will be sent to the e-mail of Repienko Diploma Manager Eduard UT2IY ut2iy@yandex.ru