The Network of Atomic Energy Information Centers together with the newspaper “Rosatom Country” with the support of the Union of Russian Radio Amateurs (SRR) from August 22 to September 03, 2020 hold days of activity dedicated to the 75th anniversary of the Russian nuclear industry. 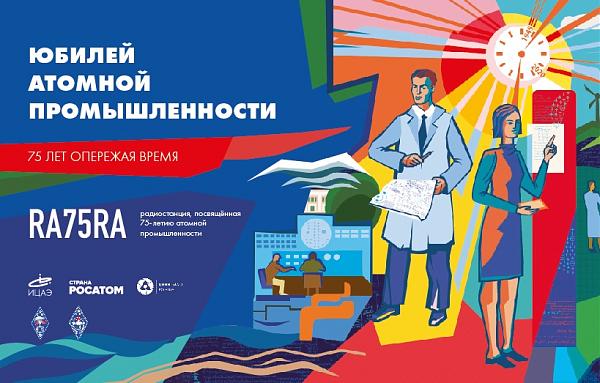 A special RA75RA callsign will be used during the activity days.

There is a diploma for active participants, the rules of which can be found on the site  RA75RA.RU.(English) 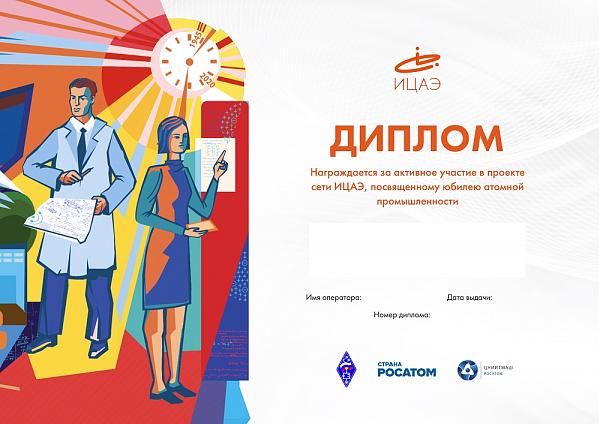 75 years ahead of time

75 years ago, the atomic bombing of Hiroshima and Nagasaki ended World War II. Then mankind was forced to learn a difficult and painful lesson in its history. It became clear that another global conflict could be the last one for the entire planet.

On August 20, 1945, it was decided to form the First Main Directorate at the USSR Council of People’s Commissars to manage the work on the nuclear project designed to destroy the nuclear monopoly of the USA. Thus began the history of the nuclear industry of the USSR, which managed to put the solution of complex defense tasks at the service of humanistic goals.

A year later, the first controlled chain reaction on the F-1 reactor was received in Europe and Asia, and two years later, the first industrial nuclear reactor A was built. The first Soviet atomic bomb RDS-1 was successfully tested in August 1949. Nuclear parity achieved thanks to the Soviet atomic project became insurance against the recurrence of the world military catastrophe, and scientists were able to direct the mighty energy of the atom in a peaceful direction.

The idea of civil use of nuclear energy was put forward by many founding fathers of the atomic project, primarily Igor Kurchatov – scientific director of the Soviet nuclear program. The world’s first nuclear power plant, tokamak, nuclear icebreaker – these are the main milestones only in the first 15 years of the life of the Russian atom.

In 1953, the Ministry of Medium Machine Building of the USSR was formed – a department that began the systematic development of the entire nuclear industry, and in 1957 Minsredmash was headed by Efim Pavlovich Slavsky. The legendary minister has been leading the industry for almost 30 years. During these years, the creation of the nuclear fleet began, the construction of nuclear power plants in the Soviet Union and abroad began. In general, with the participation of specialists from the USSR and Russia more than 70 nuclear power plant units were built in the world.

In a short period of time, Minsredmash has created many new enterprises and scientific organizations, built dozens of nuclear cities. Russian atomic workers in record time created a unique industry, a real factory of technologies. Their developments since the 1950s are widely used for the benefit of people in many industries – mechanical engineering, chemical, oil and gas, aviation, agricultural, light, medical, food, and others, helping to solve a variety of problems. “My Ministry has its own Academy of Sciences: 24 academicians, 670 doctors of sciences, 4.5 thousand candidates. The greatest economy!”, – Efim Slavsky liked to say.

The end of the XX century was a difficult period of stagnation for the industry, as well as for the whole country. However, the main result was that the nuclear industry was preserved. The successor of Minsredmash was Rosatom, which set a goal to multiply what the great founding fathers of the nuclear industry created many times.

In 2007, by the decree of the Russian President V.V. Putin established the State Corporation Rosatom, which consolidated the enterprises of the atomic industry. Today Rosatom consists of more than 300 enterprises employing more than 270 thousand specialists. The State Corporation is present in more than 50 countries. Rosatom is the world leader by the number of NPP units under construction, its foreign portfolio includes 36 projects of units in 12 countries.

“We must know five, ten times more than what we are doing today,” said one of the founding fathers of the nuclear industry, Yuli Khariton. This principle has gone down in the history of the industry as “Hariton’s criterion” and still remains the main feature of nuclear engineers.

In order to preserve and increase the unique knowledge, Rosatom annually allocates tens of billions of rubles to finance research and development. Rosatom’s innovations are widely used in many high-tech industries, for example, for space exploration and quantum computing.

Following the traditions of its predecessors, Rosatom is still working ahead of its time, developing the most advanced areas that will be in demand by mankind in the future – two-component energy technologies and small nuclear power plants, supercomputers and super lasers, composite materials and 3D printers, wind farms and energy storage. The State Corporation’s portfolio of orders for new products in 2019 reached almost 1.2 trillion rubles.

Leadership in the sphere of high technologies inside the country, stable position in the international market allows Rosatom to look forward confidently, answering the main challenges of our time.

Rosatom’s strategy is based on global priorities, which have been formulated by the UN as Sustainable Development Goals. The State Corporation’s activities are simultaneously aimed at economic growth, social improvement, and environmental protection. This is not only a contribution to carbon-free energy generation but also the formation of infrastructure, development of science, and improvement of human capital.

What in Soviet times was called social responsibility remains part of our code,” says Rosatom CEO Alexei Likhachev. – And it manifests itself in everything. And in our nuclear cities, where Rosatom assumes the responsibility not only for the production process but also for the development of territories, the social sphere – from kindergartens, schools, and medicine to the fight against the pandemic. And in the world as a whole: as a global company, we are guided by the world agenda, so the new strategy of Rosatom for 2020-2030 specifies adherence to the UN Sustainable Development Goals. This is a new world development strategy, which focuses on the interests of people, not individual corporations, political or business elites. For us, business objectives and contribute to the development of society, the country, our cities, and a specific individual are inseparable.

1st place in the world for uranium enrichment;

2nd place in the world by the volume of explored uranium reserves;

3rd place in the world by nuclear fuel fabrication (16% of the world market).

14% of the world’s NPPs use the equipment of the engineering division of Rosatom.

19% of all electricity in Russia is produced at NPPs.

4.3 dollars for the country’s GDP brings every dollar invested in NPP construction.

The operation of all nuclear power plants in Russia in 2019 alone prevented more than 100 million tons of greenhouse gas emissions in CO2 equivalent.