Club Amateur Long Distance Radio “MILLER-DX-CLUB” from January 16 to January 20 (incl.), 2023 to spend days of activity dedicated to the 80th anniversary of the Middle Don offensive operation “Little Saturn” during the Battle of Stalingrad, the liberation of Millerovo from the German invaders and the award of the honorary title – “City of Military Valor!

A bit of history:

Millerovo in WWII was of strategic importance for the Nazis, the invaders were attracted by the convenient geographical location of the city. Fascists turned the city into an impregnable fortress, their garrison numbered more than 19,000 soldiers and officers, it was surrounded on all sides by a deeply echeloned defense. In and around the city there were two major airfields, from which the Luftwaffe pilots flew to bomb Stalingrad.

Thousands of Millerites were taken into German slavery. A wild manhunt was conducted in the city, young men were caught, taken under escort to the station and sent to Germany. In several places in the city, the occupiers set up temporary concentration camps in the open air. They were given the general name “Dulag – 125” (sector 125 of the Donetsk department of camps), the largest was in the southwestern outskirts of the city (Polachka), in which, according to unofficial data, from 40 to 200 thousand prisoners of war died.

The assault on the city began on December 24, 1942, and fierce fighting for the city continued for three weeks. Particularly stubborn was the resistance of the invaders in the area of the grain elevator and near the railway station.

But this did not prevent the Soviet troops from completely liberating Millerovo on January 17, 1043. The liberation of Millerovo from the Nazi invaders was of great significance for the entire Soviet command, as it foretold the rapid end of Paulus’ army in the Stalingrad “cauldron”.

Special call signs for temporary use will be heard on the air: 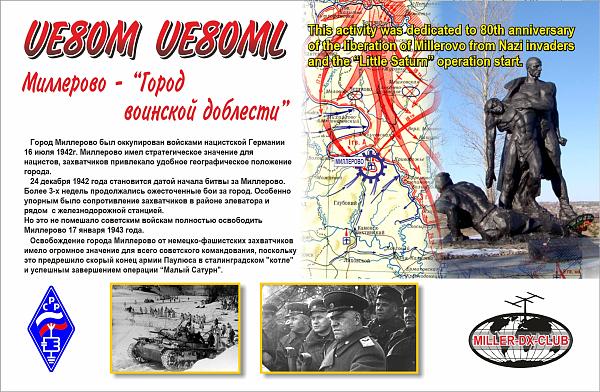 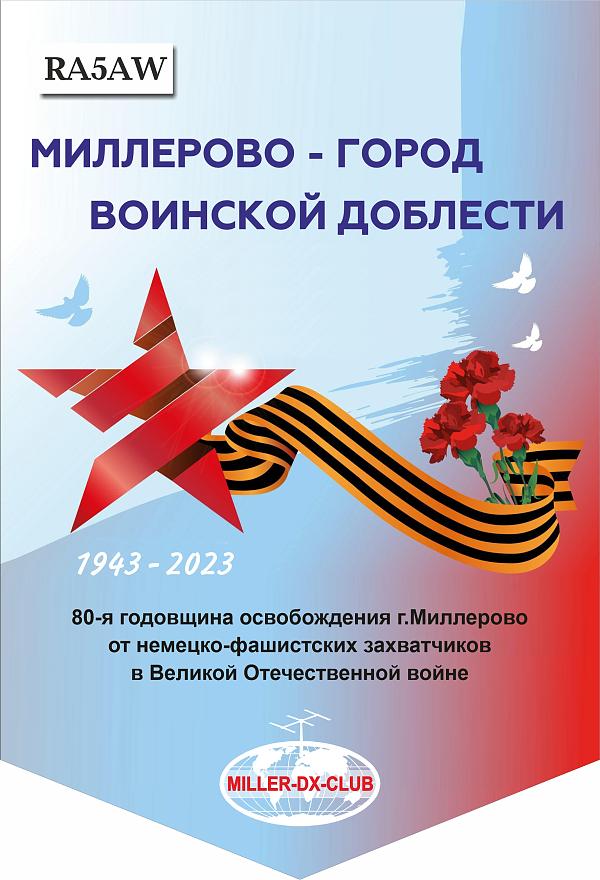 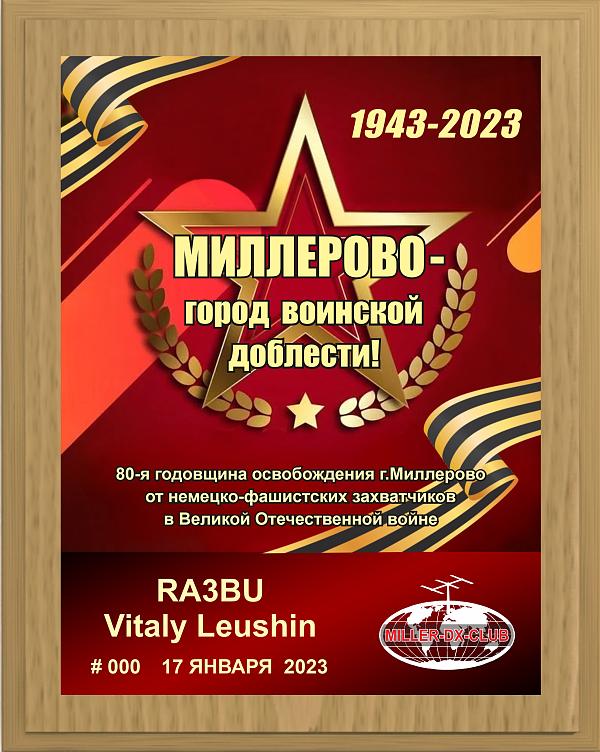 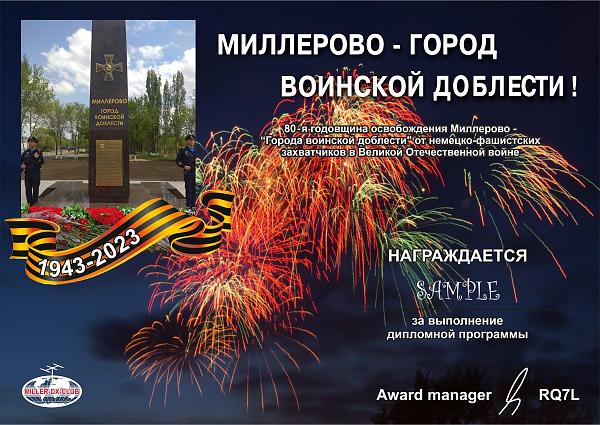 To qualify for a diploma – 80 points for QSO / SWL with special stations – UE 80 M, UE 80 ML and member operators of the club “M-DX-C” in the period from 00.00 UTC 16 January to 21.00 UTC 20 January 2023. Each QSO/SWL with a special station gives 10 points; with an M-DX-C club member operator, 5 points. Repeated QSO/SWL are counted on different bands, and different types of radiation: CW, PHONE, and DIGI (all digital types count as one type).

Electronic diplomas are issued automatically on the site: https://hamlog.online/club/mdxc solely on the basis of uploaded logs of special stations and operators-members of the club “M-DX-C”. To receive a paper version of the diploma, as well as pennant and plaque, you must provide an application to E-mail: RW6LZ@yandex.ru

Payment for the paper version of the diploma is made in the amount of – 400 rubles, taking into account sending a registered package by Russian Post to Sberbank card.

To receive a commemorative pennant, you must make one QSO with a special station and five operators – members of the club “M-DX-C”. Repeated QSO/SWL on different bands are not allowed!

To get a plaque Millerovo – City of Military Valor! you must spend QSO/SWL with both SPS on three different bands! Activators to get a diploma, pennant and plaque must during the days of activity spend – 150 QSOs Their results can be viewed on the page “TOP” site: https://hamlog.online/club/mdxc

The most active out-of-town amateur radio operators and M-DX-C club members will be awarded club commemorative diplomas in electronic format. The observer who showed the best result on the results of the project will be awarded a prize and a diploma of the Winner.