In connection with the 30th anniversary of its formation, the club of fans of long-distance radio communication with the portal “HAMLOG.RU” hold a marathon in the air part, which has become traditional and is held annually.

During the marathon, on all amateur bands, all types of radiation will work special call signs temporary use:

QSL – manager for all special call signs is – RQ7L

To get a certificate of participation, pennants, and diplomas, you must score the following number of points (links):

– Participant certificate of the days of activity
5 QSO with operators – members of Miller-DX-Club and SPS. 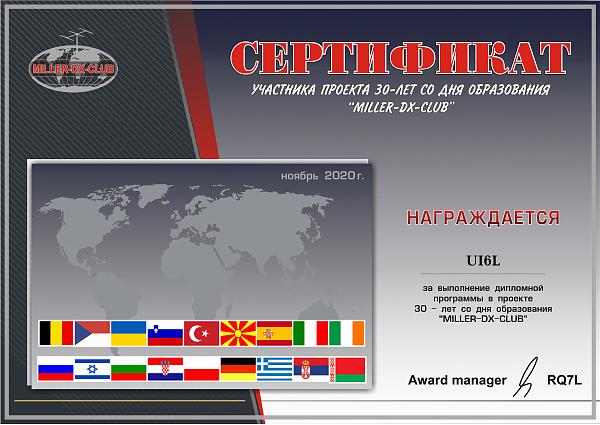 – Diploma “W-MDXC-M”
30 QSO with club members as well as special callsign,
who use the club during the marathon 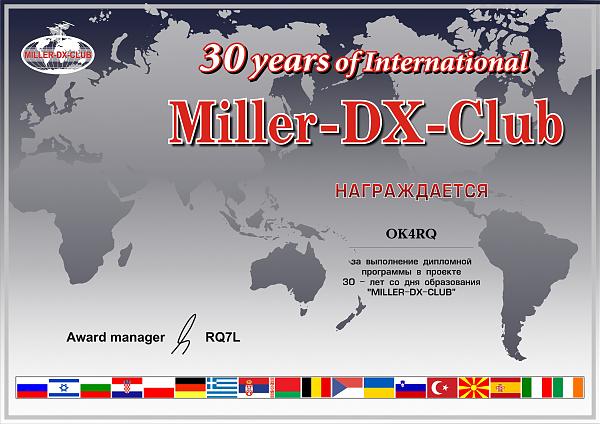 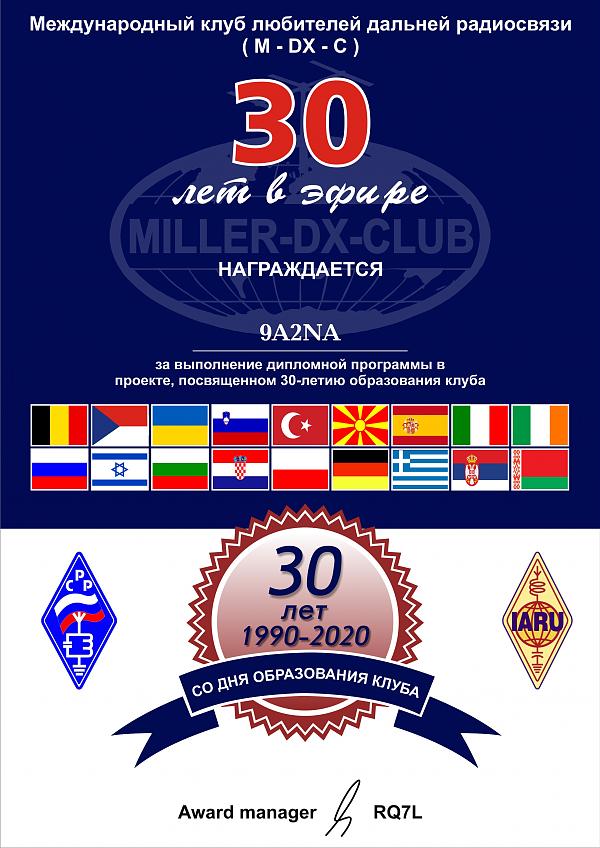 – Pennant “30 – years since the formation of the club M-DX-C”.
and “International Miller-DX-Club” it is necessary to carry out 10 QSOs (the obligatory condition of performance is, communications with the operators-members of “Miller-DX-Club” representing
4 different FIs in Russia) 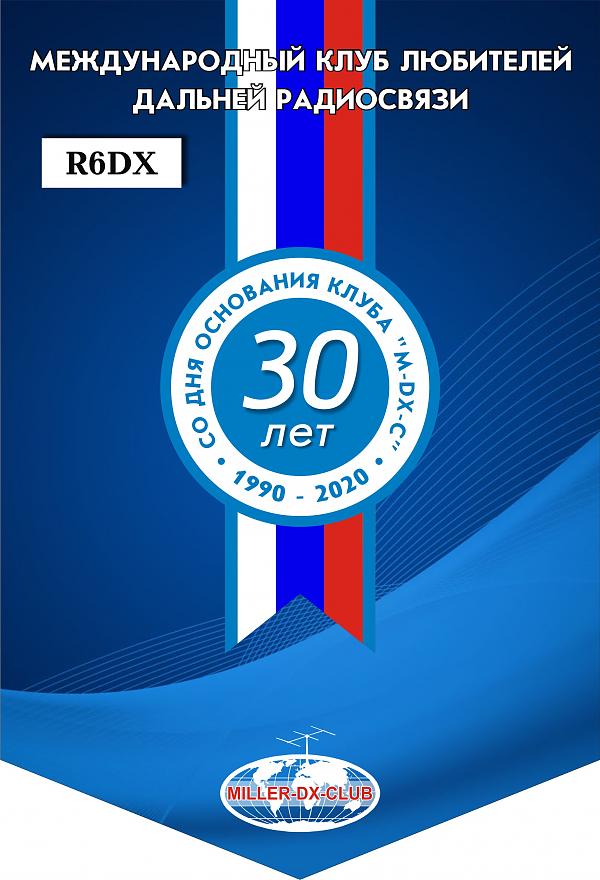 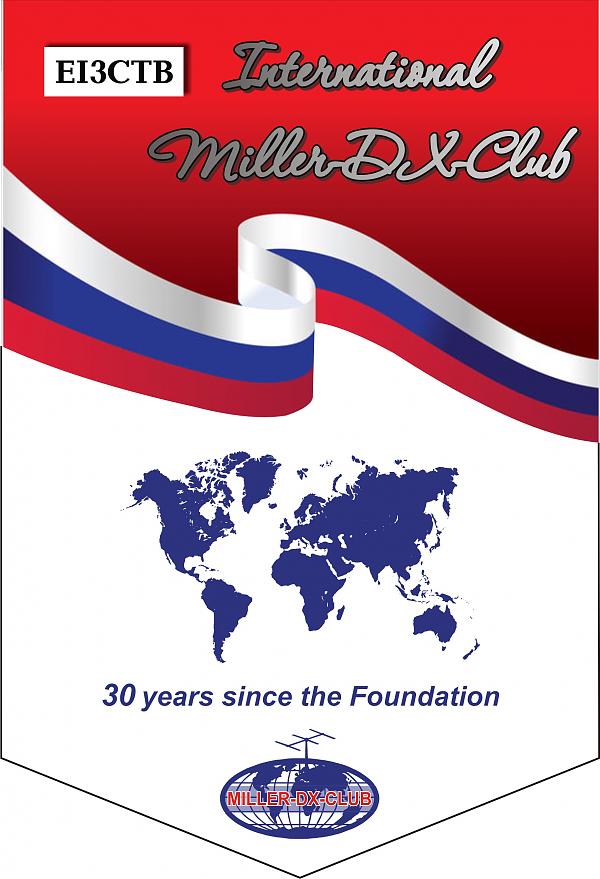 Each QSO with a club member operator “M-DX-C” gives – 25 points, with a special station – 50 points.

The “W-MDXC-M” diploma is issued only in paper format.

For radio amateurs working on VHF (144 MHz and above) one QSO/SWL gives – 10 points, regardless of the callsign of a special station or club member.

E-diplomas are issued automatically on the site https://hamlog.online/club/mdxc only on the basis of Activator logs loaded.
In order to obtain paper versions of the certificate, diplomas, pennants, as well as observers, it is necessary to submit an application for E-mail: RW6LZ@ya.ru

Payment for one copy of a paper version of the certificate or diploma is made in the amount of – 250 rubles, taking into account the sending of a registered letter by Russian Post to Sberbank card. 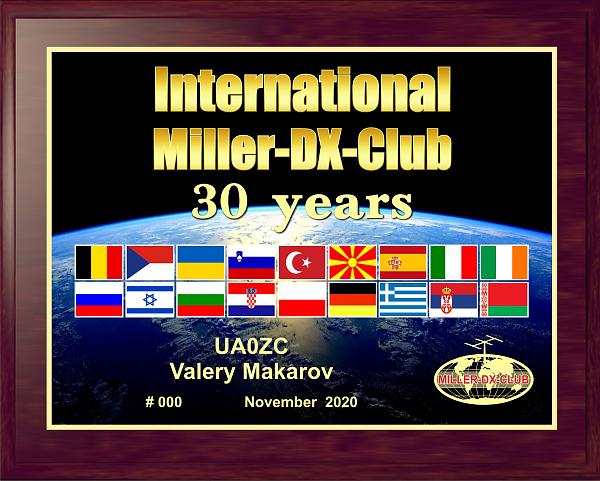 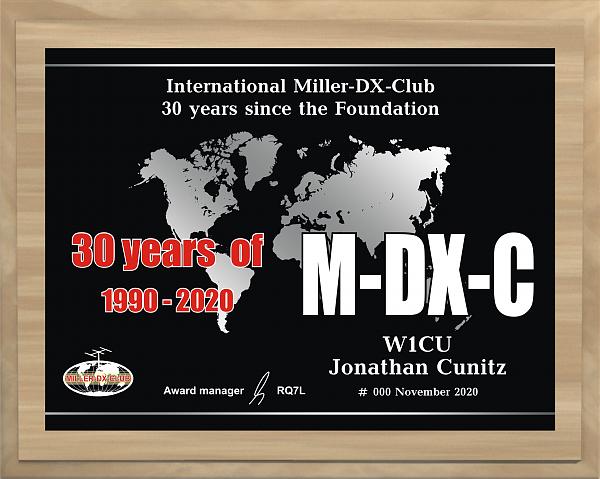 For radio amateurs working on VHF (144 MHz and above) to receive posters, it is necessary to install – 2 (two) QSO/SWL with special call signs or operators – members of the club.

Activators to receive the Certificate, pennants, diplomas, and posters should spend at least – 500 QSOs

According to the results of work in the project will be awarded,

The most active radio amateurs included in the TOP-10 list of HAMLOG.RU portal will be awarded the club’s commemorative pennants.

The most active operators – members of the club “M-DX-C”, will also be awarded the club’s commemorative pennants.

Your result will be available on the “TOP” page at https://hamlog.online/club/mdxc.

Note for Activators: upload QSO to HAMLOG.RU at least once a day.

On the occasion of the wonderful date, 30 – the anniversary of the formation of “Miller-DX-Club”, I would like to first of all to express my gratitude for the comprehensive support in the development of the club:

A little history, the official date of formation of the club of amateurs of long-distance radio communication “Miller-DX-Club” is November 16, 1990, when at a general meeting of radio amateurs Millerovo, Rostov region, it was unanimously decided to establish this club. At its first meeting the Club Council was elected, the name of the club, which takes place in an abbreviated form from the name of the city and the general vote of the President of the club, it was Lifar Sergei (RW6LZ, new – RQ7L), who is still successfully managing the club, for his active position, the implementation of new diploma projects, for his creative approach to any sporting events. In the beginning, the club represented a small group of radio amateurs who are actively working on the air and are interested in diplomas and DX-stations. In the year of formation, it was decided to establish the first diploma of the club “W-MDXC-M”.

At that difficult time, there were ups and downs! In the absence of the information field, the club, overcoming various difficulties, continued to develop, but with the collapse of the USSR came difficult times in the activities of the club and for independent reasons was eventually suspended.

The club became a new line of development in early 2014 when it was replenished with new, purposeful radio amateurs interested in its further development.

At present, the club has an international status, as its members are radio amateurs from 23 countries, and the first foreign radio amateur – a member of the club – Josep Olivera (EA3KS).

Over the past years, the club has successfully conducted such grandiose projects as: “55-Cosmic Years”, winter war games in Russia, the World Festival of Youth and Students in Russia, the annual “Russia New Year” and folklore festival “Sholokhov Spring”, events related to the period of formation of the club. For all these years 166 special callsigns of temporary use sounded on the air, SPS operators and club members conducted about 3 million QSOs with radio amateurs from 295 countries and territories of the world, all radio amateurs who sent their QSL through the bureau and used the order of OQRS, received in their address beautiful full-color QSLs from our club!

In 2020, an Agreement on mutual cooperation was concluded between OQRS Management and our club, which gave a powerful impetus to the further development of the club!

The diploma program of the club consisting of many diplomas in electronic and paper formats, as well as pennants and posters of international level, have become very popular among Russian radio amateurs, as well as radio amateurs from far abroad.

There are a lot of plans and the staff of the club is full of optimism in their excellent implementation, will continue to work actively to involve new members of the club, further development of the club and popularization of radio amateurism in our country!

Let me congratulate all the classmates and radio amateurs who constantly participate in the projects of the club, with 30 – the anniversary of the founding of the club! Good health, success, and active work on the air in our projects!