On the last weekend of September in Orel under the flags of the international club of radio amateurs-travelers “Russian Robinson” and the Russian Geographical Society, there was held a rally “RRC Extreme Fest 2020”, dedicated to the 200th anniversary of the discovery of Antarctica by Russian sailors.

In honor of this event, the “Russian Robinson” club organized an anniversary radio station R200ANT and established a diploma program “200 years of Antarctica discovery”, which was attended by about 400 radio amateurs from around the world. 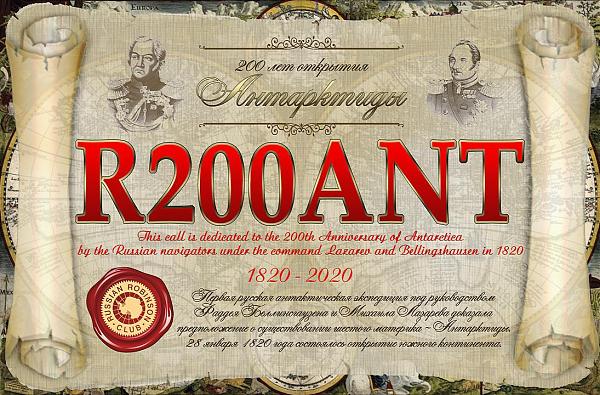 The results were summarized on the flight: during 3 months of activity 26500 radio communications with various correspondents from 125 countries of all continents, including Antarctica, were conducted. The radio operators of the jubilee radio station were Russian amateur radio amateurs – members of the “Russian Robinson” club, who expressed a desire to celebrate a memorable date on the air from their home radio stations.

The winners of the Diploma program “200 years of Antarctica opening” were: Giovanni Varetto I1HYW (coordinator of World Antarctic Base Award), Sergey Kozhevnikov RA3RGQ, and Vladimir Batuev UA9CGL. The winners were presented with RRC club awards. Congratulations!

Traditionally, annual results are summed up in different categories of RRC – among the island radio expeditions in Russia and in the world, in the Arctic and Antarctica, named “Robinsons of the Year”…

In the main category “Robinson of the Year” was Vasily Pinchuk R7AL, who spent with the team in the season 2019-2020 four island expeditions, including 2 Russian IOTA NEW ONE – the island of the Theologian in the north-east of Kamchatka, North Kurils, and a rare island XR8RRC in Patagonia, South America. Well-deserved reward!
Among women, the title “YL-Robinson” was first awarded to Julia Dyachkova R1CBL from St. Petersburg for a series of expeditions to the islands of the Baltic Sea.

It is noteworthy that she was admitted to the club “Russian Robinson” the day before. Now the club unites more than 1000 radio amateurs interested in the polar, island, and marine radio communications from 68 countries of the world.

The best Russian radio expedition under the program “Islands on the air” (IOTA) was recognized R207RRC (http://r207rrc.ru/) under the leadership of Victor Slabodchikov UA3AKO to the island of Kosa Two pilots in the Chukchi Sea. The expedition managed to reach the island in winter and install over 8300 radio communications. Kosa Two Pilots in Chukotka was the last Russian IOTA NEW ONE! Congratulations to “polar Robinsons” with success!

Among the international IOTA expeditions, the best was YJ0RRC&YJ0FWA (https://r4waa9.wixsite.com/yj0rrc) to the islands of the Vanuatu archipelago in the South Pacific Ocean. Three rare islands with a total of over 15000 connections were activated at once.

For the third year in a row RI0B from the “Legends of the Arctic” cycle (https://legendsarctic.com/novosti) became the winner in the nomination of the most extreme expedition. This time the team led by Igor Znamensky UA9KDF managed to activate Rastorguev Island in the Kara Sea, reaching it on snowmobiles in the spring of 2020 and establishing 5600 radio links. Modern radio equipment, the latest types of radio communications, and the skills of polar radiologists were the key to the success of the expedition. The film about the expedition is as always an excellent director’s work by Andrey Korobeinikov UA9LDD.

The participants of the rally were also shown a film about the earlier expedition to the Kara Sea islands, dedicated to the 125th anniversary of F. Nansen’s voyage and the 25th anniversary of the RRC club. At that time several rare islands were activated at once – Tyrtov in the archipelago Nordensheld, Firnlei, Nansen, Arctic Institute. The voyage took place on the yacht “Apostle Andrew” under the direction of Nikolai Litau (https://litau.ru/). Nikolay Andreyevich – yacht captain, Honored Master of Sports, who made 3 round-the-world voyages, member of the club “Russian Robinson” and radio amateur – his new call sign R3CN. Earlier he participated in several radio amateur expeditions taking them to hard-to-reach islands of the Arctic and Antarctic. During the last flight, Captain Litau was awarded a special RRC award to the 200th anniversary of the discovery of Antarctica. 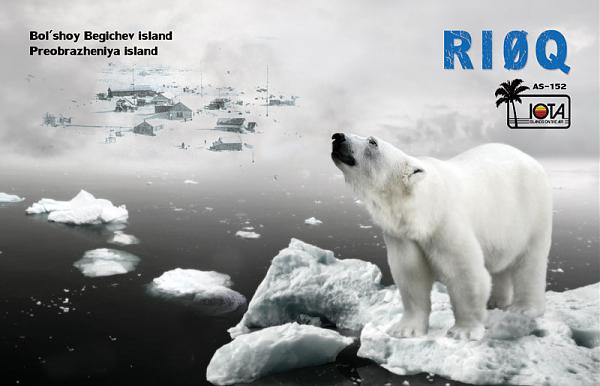 Great interest was aroused by the announcement of promising plans for 2021 for the islands in the Laptev Sea, has already received a license RI0Q.

It is pleasant to note that the “young generation” of radio amateur travelers is showing such activity. In a short period of time, several very difficult radio expeditions were conducted, which made a significant contribution to the radio development of the Russian Arctic. For his outstanding success, the head of a series of polar expeditions of “Legends of the Arctic” Igor Znamensky UA9KDF was awarded the Grand Award of the club “Russian Robinson” – Hall of Fame RRC – and brought to the Hall of Fame RRC! As Igor Veniaminovich said, this high award is an assessment of the contribution of his entire team for the past and future expeditions.

The award ceremony was attended by the President of RRC UA9OBA, Vice-President of RRC Evgeny Shchekanovtsev RZ3EC, who headed the Organizing Committee of the RRC and arrived from the UK First Vice-President of RRC Sergey Morozov RA3NAN (now the owner of the second radio call – M7NAN). Sergey is not only one of the leaders and sponsors of our club, but also an active forwarder, who made a great contribution to the development of the RRC and the international IOTA movement, the first to be awarded the highest award of the club – Hall of Fame #1. Under the friendly applause, the audience congratulated UA9KDF on the award! 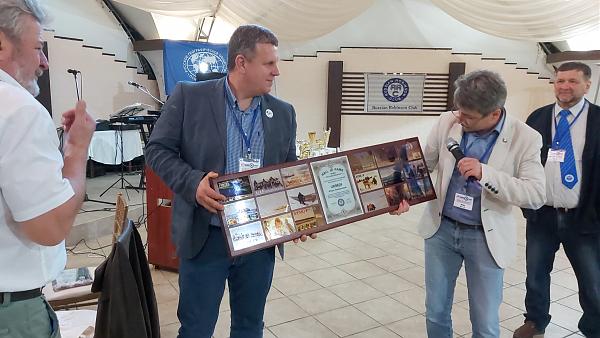 It should be noted that Igor Znamensky, who heads the Regional Branch of the RGO for Yamalo-Nenets Autonomous District, was elected to the RRC-HQ Board. It is an excellent example of fruitful cooperation between the Russian Geographical Society and the Russian Robinson Club.

Another example is the activity on the air of radio station R175JRGO from Nizhnevartovsk, dedicated to the 175th anniversary of RGO, from our colleague Valery Nesterov RA9J in KhMAO-Ugra.

A few days before the opening of the R3CG/1 trip to the polar station “Yeletskaya” (https://www.qrz.ru/news/16313.html) our colleague, the head of the radio support service of the RGO branch in YNAD, Eduard Prudky RA3III, returned. The development and implementation with colleagues of a new integrated communication system (CSS) in the Arctic zone of the Russian Federation, combined with activity on short waves of the collective radio station RGO R3CG deserves attention and respect.

Club issues were actively discussed at the meeting. The composition of the Club Council was confirmed, which includes UA9OBA, RA3NAN, RZ3EC, UY5XE, RZ3EM, UA3EDQ, RC5A, RW3RN, N3QQ, and UA9KDF. Suggestions were made to improve the work of the club site and a support group of RZ3EM, RZ3EC, RA1ZZ, UA9CGL, RA3NAN was formed. The new procedure of admission to the RRC members has been adopted – now, in addition to fulfilling the conditions for joining the club, it is necessary to receive 2 recommendations from the current members of the RRC (or 1 from a member of the Council). New admission fees – 1000 rubles have been set. (We remind that there are no membership fees in the club).

In club projects, there were also significant changes. After a heated discussion two RRC diploma programs – RMA (mountain) and RIIA (inner islands) were withdrawn from the club. They are given an opportunity to determine their own future development.

Alexander Kuznetsov’s RW3RN proposal to hold the RRC Activity Day in the “weekend” format was accepted in order to increase the club members’ activity with the identification of their RRC membership numbers on the air. A working group consisting of RW3RN, UA9CGL, RA1ZZ was formed to develop the position.

The current activities of RRC were also discussed. Among them was a proposal from Vasily Bardin RU3SD to transfer into the electronic format of paper logs of the island expeditions of the club members who became SK. Very good initiative!

Unfortunately, several of our classmates became SK (Silent Key). Among them are Mikhail Mogutov RL3AA, Vladimir Miroshnichenko UA0LCZ, Anatoly Zinkov UA6NY… The participants of the rally honored the memory of their departed colleagues. The eternal flight on the air!

During the rally “radio bridges” with RRC Vice-President George Clyants UY5XE, the Antarctic radio operator UA1QV from Vologda were installed. The best wishes were received from the RRC representative in North America – Yuri Sushkin N3QQ, who organized a number of unique radio expeditions to the islands of Alaska. Greetings from Oleg Neruchev ZS1OIN, who has spent many years working at Antarctic stations and in the representative office of the Russian Antarctic Expedition in Cape Town, South Africa, and now returned to Russia – UA3HK. Among the awardees, Oleg Sakharov ZS1ANF is the winner in the category “Best Antarctic Expedition 2019-2020”. Contacts were also held with other famous polar explorers and radio amateurs from different countries. Commemorative awards from RRC (http://robinsons.ru/) and DX Trophy (https://www.dxtrophy.com/) of famous Antarctic radio operators will continue until the end of the jubilee year. 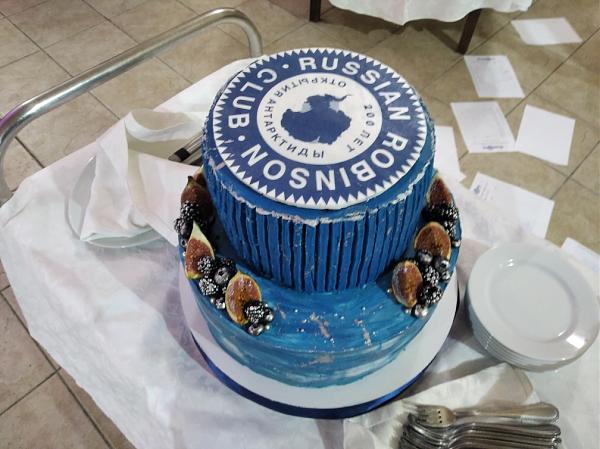 By the way, the amateur radio rarities they provided – corals and shells from the Spratly Islands, unique headwear from Myanmar and Vietnam, QSL, and paper log 1S0RR, were in great demand at the charity auction among other unique lots.

Beautiful branded red and white wine “Robinson” and “Friday” from our friends Zhukov brothers from the Kuban – R3FA&RK7A as always inspired and called for new expeditions! And the novelty – strong grape “Robinson” drink – warmed up and reminded about severe polar latitudes. Thank you!

It is impossible to tell about all the events related to the radio development of the Arctic and Antarctica, where tens and hundreds of Russian radio amateurs and representatives of other countries were received, within the news report. Not all famous Antarctic radio amateurs were able to get in touch and take part in the “RRC Extreme Fest 2020” in Orel due to various reasons and limitations, but we are happy to welcome all those who are related to radio and polar latitudes. Thank you for your activity and wish you health. Thank you, friends!