Amateur radio club-pilots “knights of the SKY” in the year marking the 75th anniversary of the Victory in the great Patriotic war holds a vigil commemorating the heroes of the aviators. The watch will last all the year 2020.

1 to July 14, 2020, the club conducts days of activity devoted to the twice hero of the Soviet Union, guards major Mikhail Tikhonovich Stepanisheva

Mikhail Tikhonovich stepanishchev was born on 2 (15) November 1917, in the village the First Kolesova (now — Zadonsk district of Lipetsk region).

In the red Army since 1937. In 1938 he graduated from Voroshilovgrad military aviation school. In June 1941 Junior Lieutenant.

In November 1943 a group of 6 aircraft led by Stepanisheva in the region of the Upper Rohachyk (Kherson region) destroyed 7 tanks and 20 vehicles of the enemy. In April 1944, a group of 18 Il-2 under the guide won first place during the attack of the airfield of the enemy near the station of Dzhankoy killed 11, injured 15 bombers.

14 Jan 1945, the group won first place M. T. stormed the accumulation of military equipment of the enemy, destroying up to a dozen tanks and three self-propelled guns. 7 April 1945 Deputy commander of the 76th guards ground attack aviation regiment guards major A. stepanishchev four leads a group of stormtroopers on the destruction of manpower and artillery at Konigsberg, and his last combat mission in the post of Deputy commander of the 1st guards assault air division, he does in the sky of the capital of Nazi Germany.

The title of Hero of the Soviet Union has Stepanisheva for 127 successful sorties, exemplary performance of combat tasks of command at the destruction of manpower and equipment of the enemy at Stalingrad, in the liberation of Donbass, Northern Caucasus and Crimea, and for his bravery and courage. Especially notable was the stepanishchev, commanding a group of stormtroopers, destruction of manpower and artillery in the area of Koenigsberg. For heroism and bravery shown in these battles, the stepanishchev was awarded the second medal “gold Star”. All the years of the war, stepanishchev has made 234 sorties. He was seriously wounded. 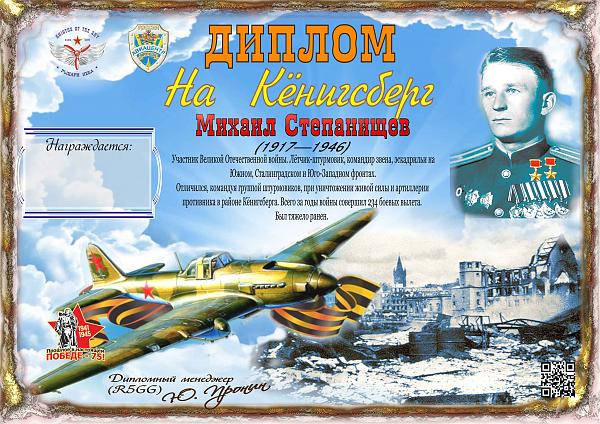 To obtain the diploma you need to score – 75 points.

For the above correspondents enter the multiplier for the following types of radiation: