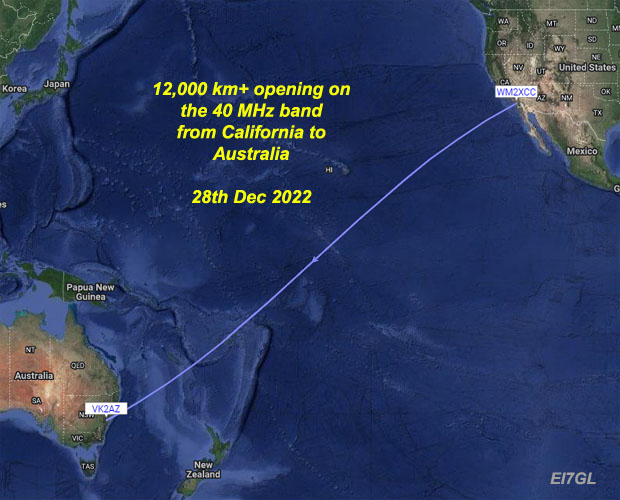 Following on from the report of a 12,000km+ opening from South Africa to the United States, here is another report of remarkable opening on the 40 MHz band from California to Australia.

WM2XCC is the experimental callsign allocated by the FCC to Chris, N3IZN. For his experimental 8m WSPR transmissions, he was using 50-watts to a half-wave vertical.

VK2AZ in Sydney was using a horizontal half-wave dipole in a very noisy suburban location.

Analysis… At 01:30 UTC, the sun would have been over the centre of the Pacific Ocean so it’s probably no great surprise that it happened at this time as the level of ionization would have been at maximum. With the solar flux now reaching 150-160, F2 trans-equatorial (north-south) paths up as high as 50 MHz are being reported recently.

In the last few weeks, there have been paths on the 50 MHz band from Australia & New Zealand to the western half of the United States. As 40 MHz is a lower band, it was likely that the path was open as well recently but this is the first time that an 8m signal across the Pacific has been reported.

In terms of propagation and potential paths, the 40 MHz band will never be as good as the 28 MHz band but it should always be better than 50 MHz. The reason it isn’t obvious is just a lack of activity and reports.