Every year, the Geminid meteor shower peaks around the 14th of December, and many VHF radio amateurs make contacts by bouncing signals off the meteor trails left behind. The maximum distance tends to be similar to Sporadic-E i.e. in the region of 2300 km.

During this year’s Geminids, Stamen LZ1KU announced a surprise reception on 144 MHz of Jon OY9JD on the Faroe Islands, a distance of 3075 km!

A composite of the screenshot from LZ1KU is shown below…

As can be seen, the mode used was MSK144 and there is one decode from OY9JD.

On an online forum later, OY9JD did confirm that he was on air at that time…

Even though there was no two-way contact on this occasion, it is still an impressive distance for 144 MHz. Remember that 3075 km is roughly the distance across the North Atlantic between Ireland and Newfoundland.

In fact, 3075 km to the west from OY9JD actually reaches the remote areas of Labrador in NE Canada.

Mode of Propagation???… Most meteor trails capable of supporting propagation of 144 MHz signals last for a fraction of a second at best with the occasional one lasting several seconds.

It does seem likely that on this particular occasion, two meteor trails in just the right spot happened at the same time.

In other words, the MSK144 signal from OY9JD was reflected off the ionized trail of one meteor, then hit off another trail several hundred km later, and then was picked up in Bulgaria.

As you might imagine, this isn’t that common as it requires there to be two meteor trails to be just in the right place and at just the right time.

Tropo Assist?… As for did tropo play a part in the path? The conditions looked pretty poor as can be seen from the image below. 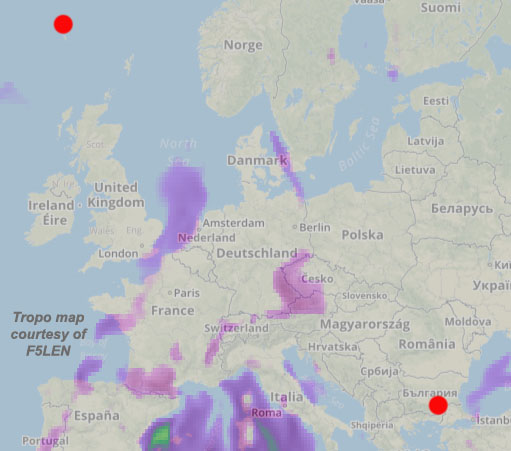 Conclusion… I’d suggest that the most likely mode of propagation was two-hop meteor scatter.

North Atlantic on 144 MHz??? … Here is an intriguing thought: If a signal at 144 MHz can get 3075 km from the Faroe Islands to Bulgaria then why not across the North Atlantic from Ireland/UK to Newfoundland?