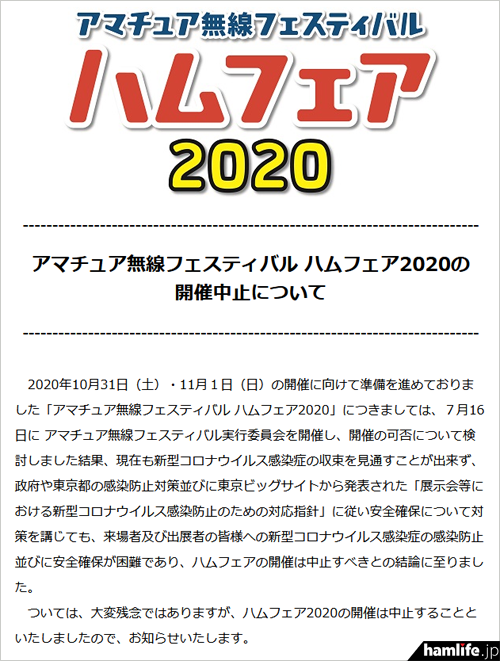 The Ham Fair (Amateur Radio Festival) has been held every summer since 1977 and is the largest event in Japan’s amateur radio world. Last year’s “Hum Fair 2019” was held from August 31 to September 1, with 222 booths exhibiting. It was the highest ever since it was held on Saturdays and Sundays for a total of 42,000 visitors.

In 2020, the schedule will be changed from October 31 (Sat) and November 1 (Sun) because the venue, Tokyo Big Sight (Koto-ku, Tokyo) will be used as a media center for the “Tokyo Olympic and Paralympic Games”. ) Was planned to be held in West Hall 3 and 4 for two days, and exhibitors were being recruited until June 30 (it is said that there were about 200 booth applications, 10% less than last year). ).

However, the spread of “new coronavirus” infection continues even after the government’s declaration of an emergency situation is lifted, and it is not possible to predict the convergence, and measures are taken to prevent infection and ensure safety established by the government, Tokyo, etc. Even if it is difficult to ensure the safety of visitors and exhibitors, the amateur radio festival executive committee on July 16 decided to cancel it after a study.

The announcement of JARL is as follows.