Speaking of sports, the club of long-distance radio telecommunication “MILLER-DX-CLUB” holds the 2nd phase of the project, with the aim to remember significant milestones of the national football and players, write his name in capital letters in the history of Soviet sport from the days when our football was in its infancy as a professional activity, formed like spectacle, took the first steps on the foreign arena, gaining fame and prestige on the biggest tournaments in the world.

We have much to be proud of!. Gold Olympic games in Melbourne and Seoul, the European Cup in Paris, the triumphal tour of the Moscow “Dynamo” in England in the victorious 1945, the European Cup Dynamo Kiev and Tbilisi, Zenit and CSKA, the pedestals of the European Championships.

Domestic football has given the world brilliant names. Lev Yashin – the greatest in the history of the world fails. Eduard Streltsov, Valentin Ivanov, Nikita Simonyan, Igor chislenko, Valery Voronin, Oleg Blokhin, albert Shesternev, Sergei Andreyev, Rinat Dasaev and many others, is supermaster who left their autographs on football fields all over the world.

On all Amateur bands, all modes will sound the call signs of operators – members of the “MILLER-DX-CLUB” and the special Callsign – RQ20LF 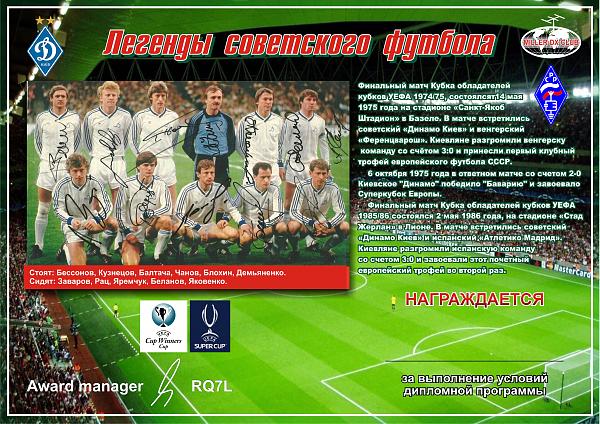 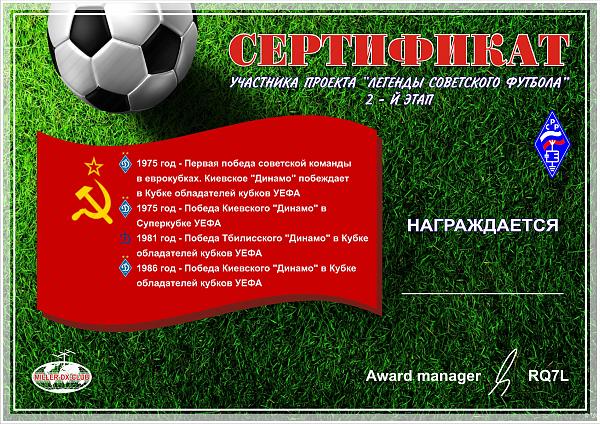 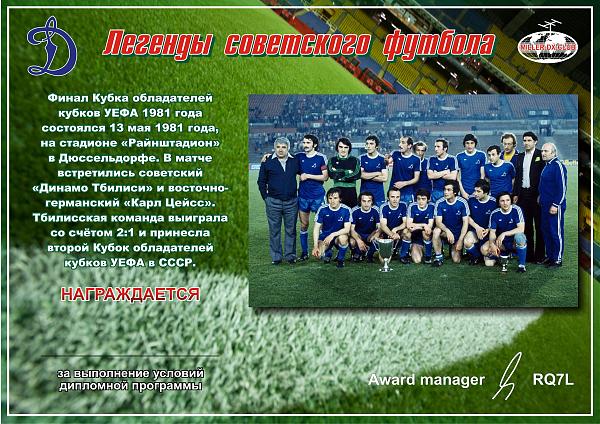 We invite all radio Amateurs of the world to take an active part in this project.

During the 2nd phase of the project, for QSO/SWL with radio stations members of the “M-DX-C”, and a special call sign, it is possible to comply with the terms of the series of certificates in electronic and paper formats: – “a legend of the Soviet football!”, Certificate of the participant of the project, a commemorative pennant “I am legend” plaques international level “the Legend of the Soviet football.”

The series consists of 2 diplomas, dedicated to the performances of club teams of the Soviet Union at the international level. To obtain a certificate, a commemorative pennant and diplomas need to dial the following points:

For radio Amateurs from Africa, North and South America, Asia and Oceania (with the exception of radio Amateurs from Russia and CIS countries), as well as radio Amateurs in the Far East (UA0C, UA0D, UA0F, UA0I,UA0J, UA0K, UA0L, UA0O, UA0Q, UA0U, UA0X, UA0Z) points are doubled. Repeated QSO/SWL are counted on various HF and VHF bands and one band different modes: CW, PHONE, DIGI (all digital modes count as one kind ).
For radio Amateurs operating on VHF (144 MHz and above) one QSO/SWL gives 10 points.

Electronic certificates are issued automatically on the website http://mdxc.hamlog.ru solely based on the uploaded logs of members of the “M-DX-C” and the special Callsign.

To receive paper versions of diplomas, as well as observers, you must submit an application by E-mail: RW6LZ@ya.ru
The activators for the diploma, a commemorative pennant, Certificate, plaques in each stage of the project it is necessary to hold at least 150 – QSO. 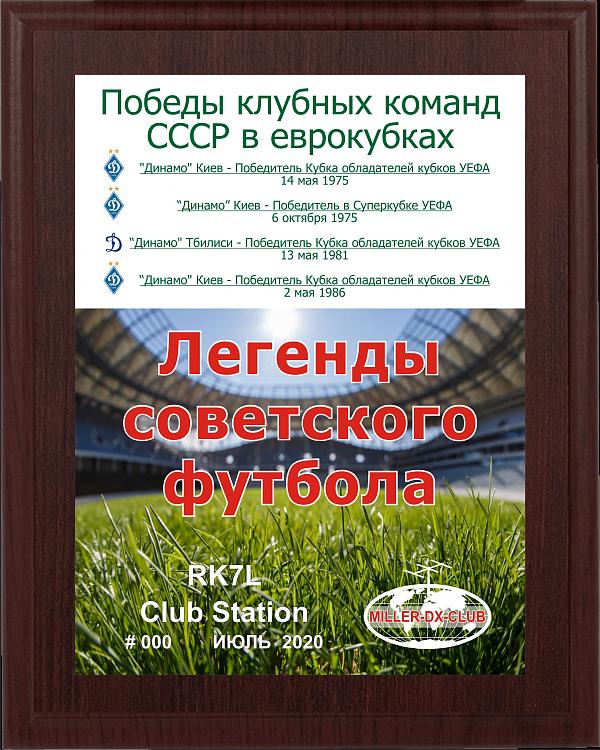 Repeated QSO/SWL on different bands are NOT PERMITTED!

For radio Amateurs operating on VHF ( 144 MHz and above ), to obtain the plaques, it is necessary to conduct a 3 – QSO/SWL with members of the club “M-DX-C”.

In 2020 to complete Certificate, diplomas, plaques, pennants – the deadline has been extended until 31 December 2020.

At the end of the project, residents of other radio Amateurs, the winners of the TOP sheet (European and Asian part of Russia), which will hold the greatest number of QSO with members of “M-DX-C” will be awarded prizes and diplomas, the most active hams will be awarded diplomas from the “MILLER-DX-CLUB” in electronic format. The result can be viewed on the page “TOP” on the website http://mdxc.hamlog.ru

The three most active Amateur radio operator-member of the “M-DX-S” at the end of the 2nd phase of the project will be awarded by prizes and diplomas of the club. Note to promoters: at least once a day to upload QSO on HAMLOG.RU

P. S. When summarizing the results to determine the Leader among non-resident radio Amateurs will be considered QSOs with members of club “M-DX-C” operating on common call QSOs made using SKED, will not be counted! In case of equal scores (ties), the winner will be determined by the smallest count contacts made with SKED and QSO.

We wish all participants of the project of clean air, be active and see you on the bands!