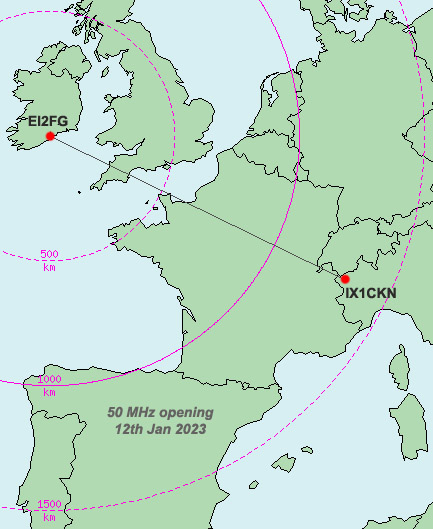 I received an email from Chris, IX1CKN to let me know about an opening on the 50 MHz band on Thursday the 12th of January 2023. The opening was a little unusual in that it was short lived and took place late in the evening at 20:50 UTC.

The map shows the FT8 contact with John, EI2FG on south coast of Ireland, a distance of about 1300kms.

In a later correspondence between IX1CKN and EI2FG by email, John reports that he worked about 20 stations in a short period of time and nearly all within the same geographic area in Italy.

As for the propagation mode, it was almost certainly Sporadic-E even if it’s late in the evening in the Winter as opposed to the more usual daylight openings during the Summer months. There is a small peak in Sporadic-E activity in the middle of the Winter which a lot of people don’t expect.

Paul, MI3LDO reports that there have been several Sporadic-E openings after sunset in the last few days with reception of low-band VHF signals from France in the 30-35 MHz range.

There has also been a recent opening from Ireland to Brazil on 50 MHz which was most likely a single Sporadic-E hop to the south and then linking into a TEP opening to South America.

The take home message is that there is plenty of activity on the 50 MHz band at the moment, you just need to spend some time listening and calling on the band.