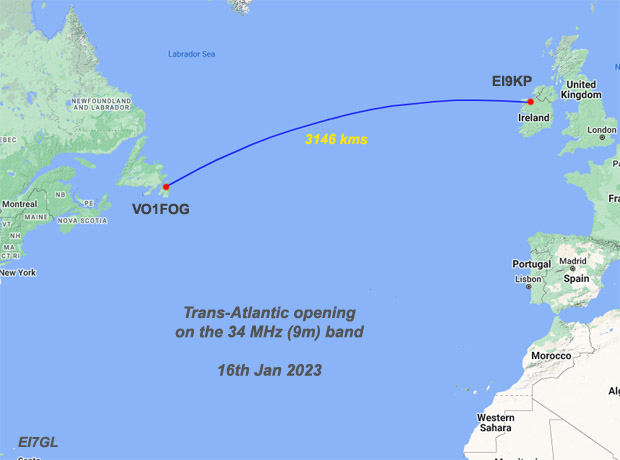 Radio amateurs in Ireland have permission to use large portions of the low-VHF spectrum for experiments and Phil, EI9KP has been carrying out tests at 34 MHz which is the 9-metre band.

Phil conducted some tests during the Quadrantids meteor shower at the start of January 2023 and the results can be seen HERE.

With the rise in solar flux to over 230 and the rise in the maximum usable frequency (MUF) into the low-VHF spectrum, Phil conducted some tests on the 16th of January 2023 and his 1-watt beacon was heard across the North Atlantic in Newfoundland!

EI9KP writes… ” I am delighted that the 1W beacon was received at 13:27UTC by VO1FOG in Newfoundland, Canada, a distance of 3145km/1995mi.  A first report from across the Atlantic, likely F2 propagation.  Thank you Larry for the report and sound clip.

EI9KP’s 1-watt beacon on 34.013 MHz is based on a RF Zero board with GPS stabilisation. The beacon is self contained in a die cast aluminium box with a 2×16 char. LCD display and a few status LEDs. The sequence was 3 x FT8 transmissions, then a CW ID and then a carrier.

The beacon antenna is also an experiment in that it is a shortened (capacitive hat) dipole with sliding end tubes that can adjust for frequencies from 32MHz to 60MHz. 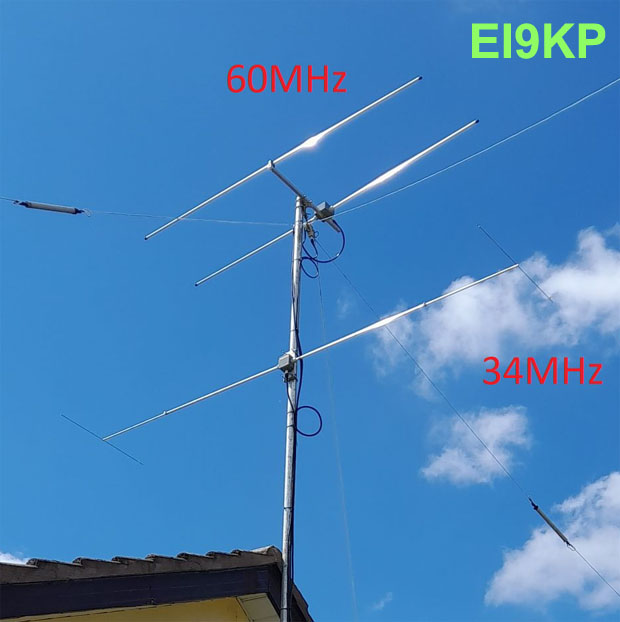