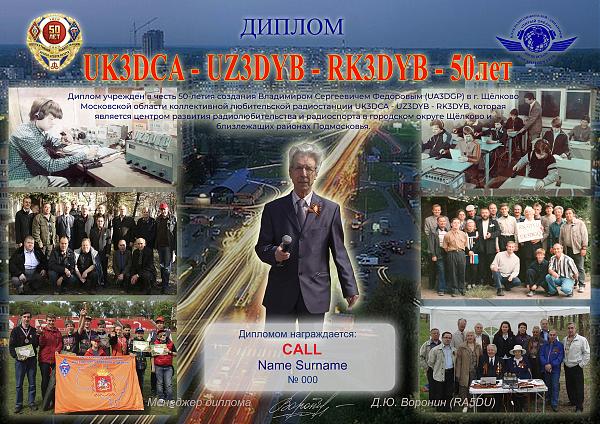 From November 30 to December 13, 2020, the radio amateurs of Shchelkovo are holding Activity Days, dedicated to the 50th anniversary of the establishment of the collective amateur radio station UK3DCA – UZ3DYB – RK3DYB in Shchelkovo, Moscow region.

The radio station was founded by Vladimir Fedorov UA3DGP in 1970. It was based at a radio operators club and was located in the town school #4. It was founded on the instructions of the Shchelkovsky DOSAAF State Committee and the Komsomol City Committee to attract young people to radio sports and fight against radio hooliganism. Since 2001, the radio station is an integral part of the institution for youth work “Club Rovesnik” and base Shchelkovsky branch of the Amateur Radio Union of Russia.

Since its inception until January 9, 2020, the station has been headed by Vladimir Fedorov Honored Radio Operator of Russia UA3DGP (SK).

The diploma has two degrees.

For communications during any period with radio station V.S. Fedorov (UA3DGP) – 25 points.

Repeated radio communications are allowed on different bands, and on one band – with different types of radiation: CW, SSB, DIGITAL (all digital types are counted as one type). When QSOs from the territories of other countries and other federal districts are operated, provided they indicate the corresponding fractions (provided by the CEPT rules and regulations of the Russian Federation), the points for QSOs with such stations are credited according to the general procedure. For 160m band and VHF radio communications points are doubled

By decision of the founders, the most active during this period “hunters” and “activators” of the diploma will be awarded a commemorative sign “UK3DCA – UZ3DYB – RK3DYB 50 years”.

The basic diploma is given for free in electronic form at hamlog.ru. Conditions of receipt of the plaque you can specify from the manager of the diploma. Diploma manager – Dmitry Voronin RA5DU.