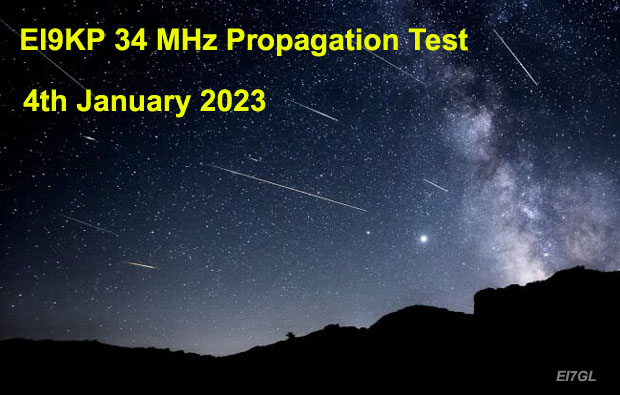 Phil, EI9KP in the west of Ireland will be conducting some propagation tests on the 34 MHz (9m) band on Wednesday the 4th of January 2022. This coincides with the peak of the Quadrantids meteor shower which is expected to peak around 03:00 to 04:00 UTC on the 4th.

EI9KP will be using a supervised 1-watt beacon on 34.013 MHz into a horizontal dipole with capacitive end loading. The beacon sequence is three x FT8 (15s) transmissions, then a CW ID (callsign + locator) and then a 4-second carrier which completes the 1 minute period. The cycle then repeats.

Before anyone asks, yes… it’s 34 MHz and not a mistake. Radio amateurs in Ireland were given permission to carry out experiments in most of the low-VHF spectrum back in April of 2018. See previous post HERE 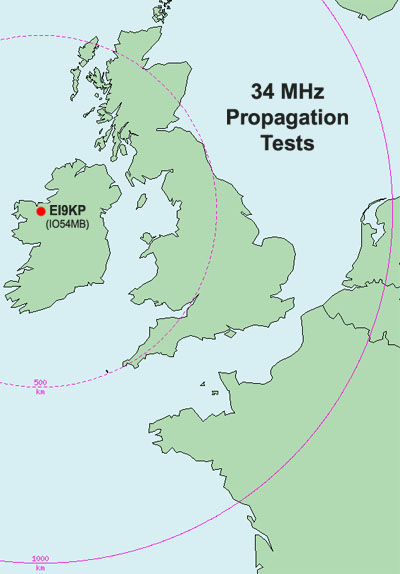 If you’re within say 1000kms of EI9KP then leave your radio on FT8 overnight and see if you get any decodes. I know MSK144 would be a better mode for meteor scatter but it’s not part of the software that Phil is using. This is also a basic experiment, a lot more people are geared up and familiar with FT8 than MSK144.

Any listeners close in… say under 200kms may hear the signal by ground wave, tropo or via aircraft scatter. 200-1000kms should be ok for meteor scatter.

From 09:00 to 17:00, F2 propagation should come into play and there is a possibility the signal may be heard in Europe or North America. And of course, you can never rule out the possibility of Sporadic-E popping up.

If you’re interested then have a listen and be sure to send your reports to Phil, EI9KP on QRZ. You can leave them as a comment here if you wish.