Bit by bit, the DMR amateur radio digital network around Ireland is gradually improving. The digital EI7WCD repeater in the east of Waterford county started off in Tramore on the coast, then moved into Waterford city and was recently moved to a high site in the city.

The coverage of the digital repeater should now be similar to the FM repeater EI7WCD which is shown above. The improved coverage should fill in the gaps between Mt.Leinster to the north and Clashmore to the west and provide saturation coverage of Waterford city.

The report below from the Southern Ireland Repeater Group.

Major upgrade work was carried out to the Southern Ireland Repeater Group’s 70cm repeater EI7WDR on 433.275 MHz at Carrickphierish in Waterford city on Saturday, August 29th. All equipment including antennas and cables were replaced. The Motorola MC Compact repeater which had been in service on the site since 2004 was replaced with a Motorola MTR2000 which has a higher power output than the previous unit. 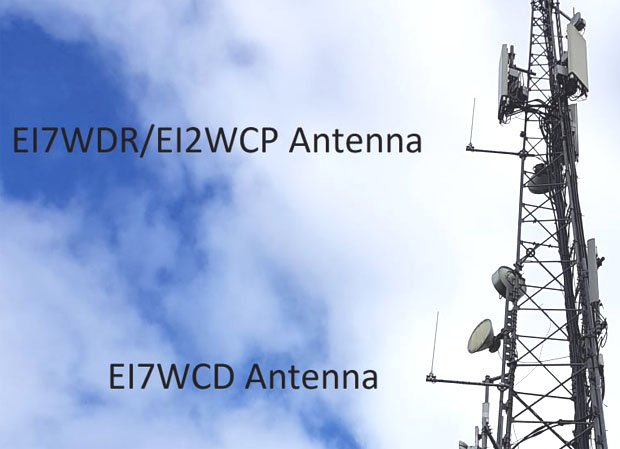 The antennas were replaced with two Diamond SE-50s and the feeder cable upgraded to Andrews Heliax LDF4-50. A Sinclair Q3220E duplexer replaced the old one which allowed the repeater to use one antenna for TX and RX freeing up the second antenna for use with the EI7WCD digital repeater which was also installed on the site as part of the upgrade work.

The work carried out should greatly improve the repeater’s coverage and users should note that the EI7WDR repeater on 433.275 MHz now requires a CTCSS tone of 103.5 Hz to access it.

Signal reports would be appreciated and can be emailed to sirnrepeaters AT gmail DOT com.