Most important for the Russian economy and security, the news passed unnoticed: the government dramatically increases state support to the electronic industry. Funding will grow by more than an order of magnitude, to 160 billion rubles. How does the United States restrict Russia’s access to the latest developments of microelectronics and what should be Russia’s reaction?

For over half a century we are living in a completely new world – the world of microelectronics. This era began in 1958 with the invention of the scientist’s Jack Kilby’s first integrated circuit that opened a highway for the development of the electronic industry. Today, integrated circuits account for the lion’s share of products of the electronic industry fully replacing many discrete components. 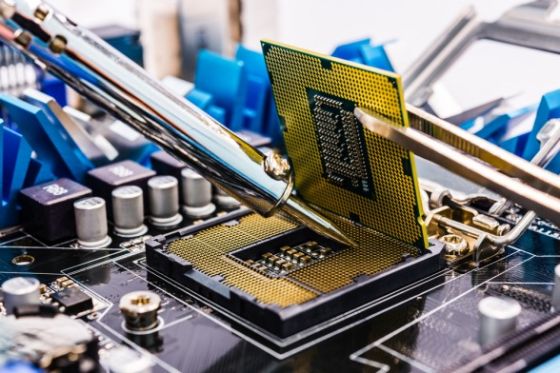 We can say that today the country that does not have at least part of the technology cycle of production of microelectronics, is the de facto in total dependence on its producers. Considering the fact that the microelectronic components are now used literally “from the satellite to the iron”, restricting access to them creates for the country to block a fatal problem for the critical number of production chains.

This is the approach used by the Western countries in the post-war confrontation with the Soviet Union, by creating in 1949 the specialized structure – a Cook (eng. Coordinating Committee for Multilateral Export Controls, CoCom). Cook received the status of an international organization, which was charged with implementing the multilateral export controls on goods and technology in the USSR and other socialist countries. Throughout the cold war, COCOM was the list of “strategic” goods and technology not subject to export to these countries. The microelectronics in the manufacture of which Western countries significantly ahead, has consistently ranked in lists of the COCOM on the podium.

A fairly quiet period for Russia 1996-2014, which was held under the shadow of the aforementioned agreements, unfortunately, created a situation “sticks with two ends”. On the one hand, in exchange for participation in them of Russia granted almost unlimited access to the Western microelectronics technology. But on the other hand, this “opium” of the latest Western achievements almost completely killed and destroyed let your slow and frail, but the domestic industry of microelectronics.

The situation changed radically after 2014 when U.S., EU, and several other Western countries began to enter against Russia’s new, politically motivated sanctions, which received the code name “point” in order to avoid comparison with the technological blockade of the USSR during the cold war. However “surgical” nature of sanctions was a symbol – microelectronic components to new sanctions were again prohibited a “wide front”, which immediately created for Russia a number of intractable and vexing technological problems. In particular, affected the space industry, arms production, nuclear industry, aviation and shipbuilding, oil, and gas industry.

However, this was only the beginning of a process that soon acquired global reading. Access microelectronics today has become a modern analog of the “powder and shot”, the lack of which proved fatal to the civilizations of the Americas and South Africa.

The new restrictions, which were imposed in late June 2020, became almost a full return to the rules of COCOM, even without a formal announcement of specific bounding procedures. June 29 came into force, two new regulations Bureau of industry and security (eng. Bureau of Industry and Security, BIS) of the U.S. Department of Commerce, which further restrict the potential export of sensitive technology to Russia, China, Venezuela, Iran and a number of other countries, which cause the “displeasure” Washington has its independent policy.

The new rules, the United States canceled a simplified model of customs clearance of microelectronics for civil use, which was enacted after the elimination of COCOM and the transition to Wassenaarse agreements. The phrase “…semiconductors, integrated circuits, and processors, computers, telecommunication equipment…” repeatedly emblazoned in the text of the new rules of the BIS access to microelectronics again becomes a weapon of the blockade.

If before the export deliveries of microelectronic components for foreign commercial companies are not required permits issued in the notification procedure, but now each delivery, you must obtain permission. Upon receipt of such authorization, the buyer must prove to BIS officials that he is not related and was not associated with security agencies “forbidden” countries, and to do it separately for each consignment.

Exports in favor of the related departments of power companies prohibited completely and without exception, prohibited the export through a third country, exports through intermediaries, and other indirect schemes. And part of the goods, which is not allowed to use American electronic components, named specifically-for example, turbines, and generators for nuclear power plants, avionics and navigation equipment for vessels, rocketry, satellites, unmanned aerial vehicles. Practically, this means that the COCOM restrictions are back in action, albeit camouflaged under the guise of “notifications for BIS”.

The current situation differs from the siege of the “Eastern block”: to get rid of close ties with China for the United States is much more difficult than to stop a fairly modest background in the global electronics supply in Russia. For example, it is not clear how now you have to put in any regular iPhone – because most manufacturing enterprises Apple is located in China. However, there is no doubt that limitations in microelectronics is not only not disappear, but will increasingly become tougher in the future.

What can Russia do?

However, a closer look at modern microelectronics gives rise to a simple question: “And whether these new restrictions just as effective as the blockade of the USSR?”. Because, sadly, the continuous improvement of semiconductor technologies that accompanied our world for the past half a century, has its physical limit.

Today, designers and engineers have come close to the physical limit to reduce the size of a single transistor, which is the basic “building block” of any semiconductor chip. This is determined by the size of a single lattice spacing of crystalline silicon used in chip manufacturing. Two neighboring atoms of silicon are separated from each other in a crystal at a distance of 0.54 nm then it is easy to calculate that the shutter of the modern transistor, created on the “technology front edge”, which is now at 7 nm, such silicon atoms, only about 11 layers.

Fundamentally to ensure the tunnel effect in the gate can and fewer layers of atoms of silicon (the theoretical limit is five or six layers), however, this reduction process occurs another problem experienced line processes 5 and 3 nm, which is currently developing, for example, Samsung, give unacceptably low yield chips. And high reliability and low cost of chips, recall, was one of the conditions for the transition to microelectronics. Hence the famous paradox – no one wants a chip that one and a half times better performance if its price will be three times higher than its slower competitor.

Much more modest now and technological backwardness: for example, the Chinese clones are advanced American processors Ryzen called Hygon based on the developments of the late 2016 – early 2017, so the gap is three or four years, not five to ten years, as in times of confrontation between the USA and the USSR.

In particular, it was stated that the processors Hygon became the basis of the Chinese supercomputer Sugon Advanced Computing System, developed in 2018, and immediately caught in the world’s top 100 supercomputers.

However, even the inevitable slowdown in China to improve their processors caused by the prohibitions of the United States is unlikely to be significant for vital applications. For example, a conventional problem of computing the correct aerodynamics of the fifth-generation fighter will be calculated in Chinese Hygon “whole week” is three days Ryzen last generation. And what’s wrong?

In that case, if Russia will be able to maintain the technological cooperation with China in the production of microelectronics, which is quite likely (in fact we literally “put in the same boat”), the situation with the blockade is not going to look so deadly. In this case, Russia can not “to tear veins”, trying at any price to quickly master technology 7-14 nm chips which are today the front edge of technological advances. In the end, the challenge is not building a technological autarky, but rather a new international technological cooperation, but without the tyranny and dictates of the United States.

And for such purposes, announced funding of 160 billion rubles for the Russian electronics next year looks adequate and sufficient. With such money it is possible to master your own production of many critical components of microelectronics, even based on the technology of five years ago, but – its. Moreover, the rapid progress in microelectronics is not expected, so the preconditions for a catastrophic rupture in the future just yet.

Therefore, we expect the program of development and modernization of Russian electronics. Because without it the sovereignty of the country will always be under the invisible but deadly threat.