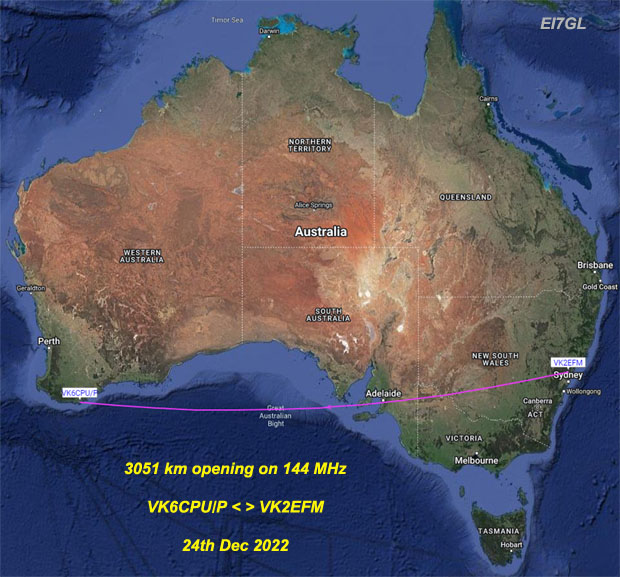 Very long distance propagation paths on the 144 MHz band are always of interest and those that exceed 3000kms are especially so. In Australia and New Zealand, there are quite a number of radio amateurs using the WSPR beacon mode to cary out propagation tests.

Leigh, VK2KRR reports on a special 3051 km opening on 144 MHz on the 24th of December 2022. It should be noted that countries in the southern hemisphere are now in the middle of their Summer Sporadic-E season.

Leigh writes…”This afternoon 24.12.22 at 0524z I noticed a report on WSPRview of VK2EFM to VK6CPU/p on 2m at 3051 km. Initially I thought it must be a mistakenly reported spot sent to wrong band, but upon further investigation and discussion with those involved, it appears this spot was real, which is quite unbelievable really considering the circumstances at the time.

The crazy part about it was that the propagation was well in decline from a quite good high MUF period which had lasted a  number of hours with MUF reported up to 107.7 MHz and path covering a good deal of southern Australia.

Coincidentally at the same time there is also tropo propagation across the Great Australian Bight from VK5AKK to VK6CPU/p and VK6NI. 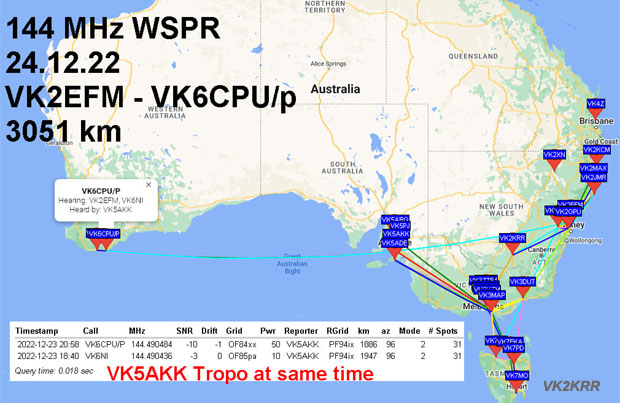 To make it somewhat more questionable, Allan Savins VK2EFM transmitted on both 6m and 2m WSPR at the same time at 0524z as was demonstrated by the local reports.

The propagation question would be, how did the signal get across? A double hop E, a Chordal E? or maybe a single E hop then into tropo ducting across the Bight?

Notice the path exactly lines up with the VK5AKK tropo path, which is interesting.

Also of note is that there was no reception of any 6m WSPR signal from VK2EFM in VK5 or VK6 at 0524z, the max distance was 440 km to myself which was probably some sort of backscatter.

Another thing to note was that from midnight to 6am that 6m WSPR had good paths happening, I had a path with VK8RH all night, and was still there at 6am. So the MUF was raised through the night which is a good predictor of high MUF during the day.

Edit- oh and congratulations to Nigel VK6CPU and Allan VK2EFM for this path. VK6CPU/p is actually a remote station at Albany set up by Rob VK6LD by the way.

Analysis… Just to add to the available info, there was only one spot for the opening between VK2EFM and VK6CPU/P and this is it… 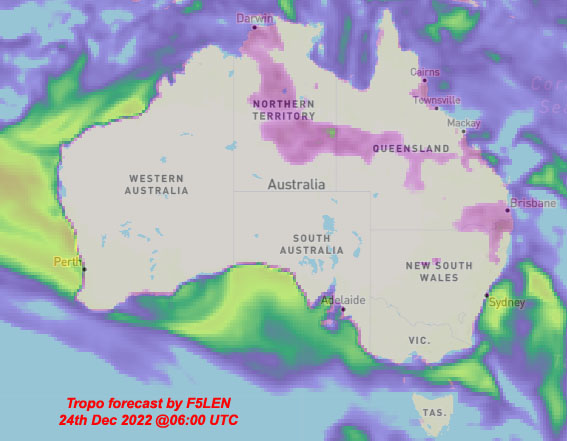 It suggests that there were reasonable tropo conditions on 144 MHz across the Great Australian Bight. This would account for signals going 1800kms from the SW corner of Australia to Adelaide but what about the remaining 1200kms or so from Adelaide to Sydney?
I suspect it was probably a Sporadic-E opening from Sydney and then a tropo duct across the Bight but it’s impossible to be sure.
A similar opening to this happened back on the 15th Dec 2020 as outlined in this previous post HERE
1) More examples of long distance paths on 2m can be found on my 144 MHz page