The club of radio amateurs- aviators “Knights of the Sky” from 23 to 31 January 2023 holds the next activity days, devoted to the 90th anniversary of the S.V. Ilyushin Aviation Complex.

It was founded on January 13th 1933 by order of the Deputy People’s Commissar of Heavy Industry of the USSR and the Head of the Main Administration of Aviation Industry P.I. Baranov on establishing Central Design Bureau (TsKB) at plant 39 named after V.R. Menzhinsky for organization of a closed cycle of design and production of light aircraft. S.V. Ilyushin was appointed head of the Central Design Bureau and deputy director of the plant[1]. Earlier it was called the S.V. Ilyushin Design Bureau. At the same time Sergey Vladimirovich headed the design team No.3. In September 1935 Ilyushin’s team was transformed into the Experimental Design Bureau of V.R. Menzhin Aviation Plant. R. R. Menzhinsky, and Sergey Vladimirovich became the Chief Designer of the Experimental Design Bureau

For the entire history of the enterprise more than 100 types of aircraft have been designed.

In the 1940s the production of the first Russian mass passenger aircraft began, which marked the beginning of establishment of air transport aviation in the USSR

In 1970 the position of chief designer was taken by G. V. Novozhilov

In 1971 the heavy military transport aircraft was developed

On December 24, 1983 according to Order No.4 of the Department of Aviation Industry the Moscow S.V. Ilyushin Machine Building Plant was renamed into the Joint Stock Company named after S.V. Ilyushin

On April 14, 1994 by the Decree ¹ 475-p of the Government of the Russian Federation the company was reorganized into the Joint stock company of open type “Aviation Complex named after S.V.Ilyushin”

On April 8, 1996 the company was renamed into Joint Stock Company “Ilyushin Aviation Complex”

In fall 2012, tests of the deeply upgraded version of the IL-76MD-90A were conducted 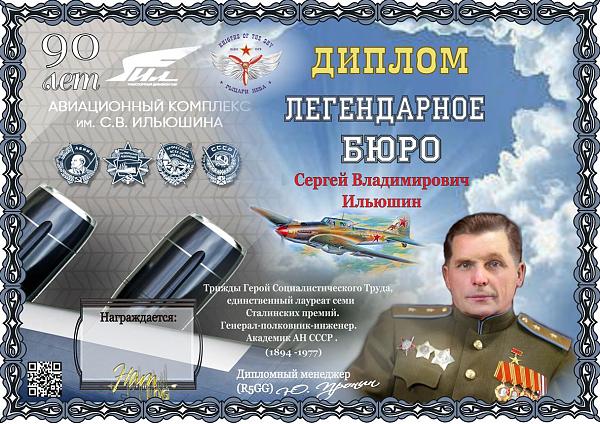 Conditions for the Legendary Bureau Diploma:

Conditions for the diploma count from January 23, 2023

The radio call with honorary member U4MIR will count for 20 points.

Royces of the Sky

The QSO with members of Knights of the Sky awards 10 points.

There is a multiplier for the following types of radiation for connections with activators:

Communications with the same club member in the same day count on different bands, but on ONE band with different types of radiation (all DIGI counts as one type)

Members of the RYTHERS OF THE SKY club receive activator diplomas during Activity Days when at least:

As applicants to members of the club “Knights of the Sky” diploma is not issued.