Over the last month or so, I’ve had several posts up on the blog about recent Trans-Equatorial Propagation (TEP) openings on 144 MHz between Brazil / Argentina and the Caribbean. Most of these contacts have been in the range of 4500 to 6000kms. See my 144 MHz page.

Today, I came across a post on a forum about a commercial FM radio station on Band 2 (88-108 MHz) in Columbia being heard in Chile, a distance of some 4580 km. 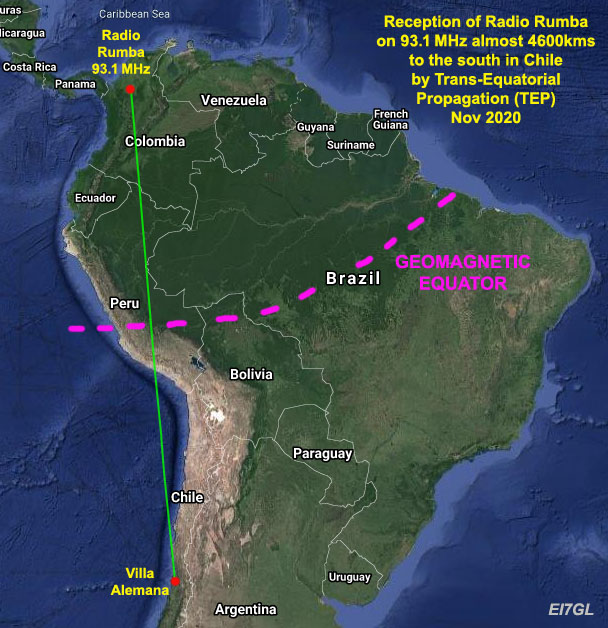 Radio Rumba is a radio station in the city of Caucasia in Columbia in South America. Its FM transmitter is on 93.1 MHz and it has as far as I can tell an output power of 5 kW.

On the evening of the 20th of November 2020, Mauricio Toro in the town of Villa Alemana near Santiago, Chile heard Radio Rumba on 93.1 MHz, a distance of some 4580 km.

Considering that both the radio station and Mauricio were both equidistant from the Geomagnetic Equator, were at right angles to it and the local time was 21:30, the most likely mode of propagation was Trans-Equatorial Propagation (TEP).

With Trans-Equatorial Propagation (TEP), zones of high ionization occur on either side of the geomagnetic equator in the F layer of the ionosphere. What makes the mode so interesting is that it can allow propagation on the VHF bands from 50 MHz to 144 MHz. As the zones of ionization are roughly 400kms above ground level, the propagation paths achieved are in the region of 4000 to 5000 km, much greater than what might be usual with Sporadic-E.