The map below shows the FT8 signals that I heard on 10-meters on Sunday the 13th of December 2020.

With the Solar Flux at 82, there were some weak F2 openings to the USA, South Africa, Thailand, and Australia. Interesting but much less than say the end of November when the flux was over 100.

What was interesting about Sunday the 13th was the number of signals from Europe. 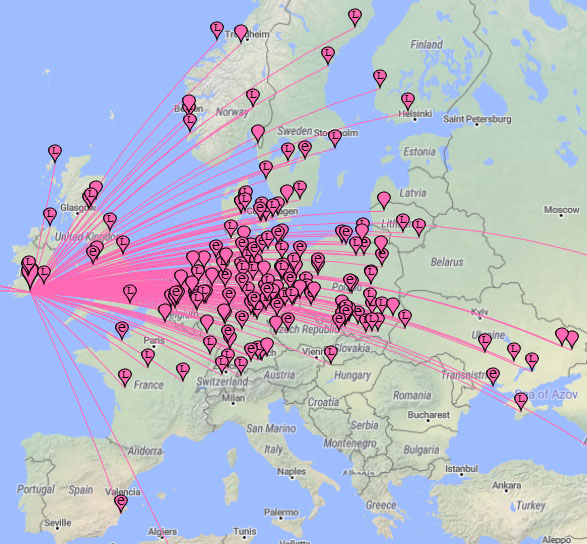 As the map shows, I was hearing a lot of stations from Germany and Poland, all in the region of 1000 to 1800 km. These signals were via Sporadic-E.

While the main Summer Sporadic-E season in the northern hemisphere lasts from about May to July, there is a much smaller Sp-E season in the middle of the Winter in December and early January.

Geminid Meteor Shower… The Geminid Meteor shower peaks around the 12th to the 14th of December every year. The dust left by meteor showers acts like fuel for the formation of Sporadic-E layers at about 105 km above the Earth.

It might be just a coincidence but the Geminid meteor shower may well have been the reason for this Sporadic-E opening.

With a meteor shower in progress, there is always a possibility that all I was hearing were 15-second reflections coming off a succession of meteor trails. However, there seemed to be a complete lack of stations from Spain and Italy which kind of discounts that theory. I’d be pretty sure it was mid-Winter Sporadic-E.