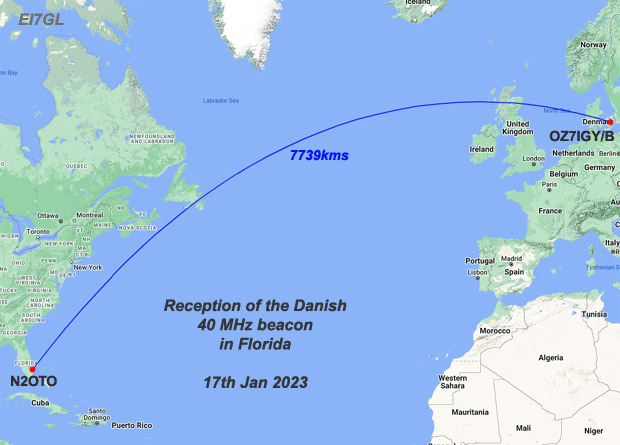 On the 17th of January 2023, Rupert N2OTO reported the reception of the Danish OZ7IGY beacon on 40.071 MHz. This is as far as I know the first reception report of the Danish 8m beacon in North America.

I have never seen any reports before for this 8m beacon being heard outside of Europe although paths were very likely open.

The distance from OZ7IGY/B to N2OTO is 7739kms and it’s very likely the propagation mode was two hops of the F2 layer. It’s probably no accident that the signal was heard in Florida as this is the most southerly of the great circle paths.

The solar flux was above 220 which suggests that the F2 maximum usable frequency (MUF) was well above 30 MHz and into the low VHF region. 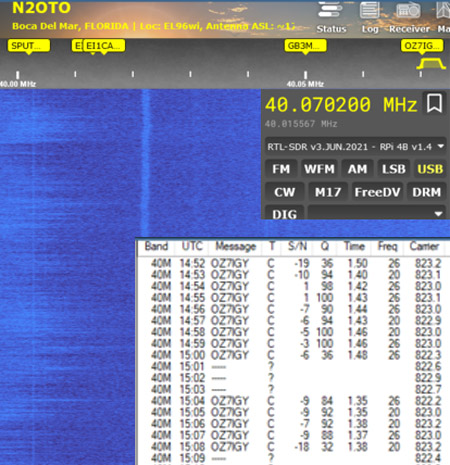 The composite screenshot from N2OTO above shows some of the PI4 decodes. The opening seems to have lasted about 16 minutes and possibly coincided with a sunset in Denmark.

The peak signal had a signal to noise ratio of +1dB which would have meant that the CW ID would have been quite easy to hear.

As the OZ7IGY beacon is frequency stabilised by GPS, you can see that the receiver used by N2OTO is about 20 Hz off frequency which is pretty normal for most radios. It’s a neat test and result for a VHF beacon that is on the other side of the Atlantic.

If anyone else wants to listen for the OZ7IGY beacon then try first on 28.271 MHz and get used to using the PI4 software. Once you get it working, try listening then on 40.0702 MHz USB.