Larry, VO1FOG in Newfoundland, Canada has been carrying out a number of long path propagation experiments on the HF bands recently and I found this one especially interesting. For the purpose of clarity, I’ll try to give an overview of what happened so people will understand what is in the video clip further down this post. 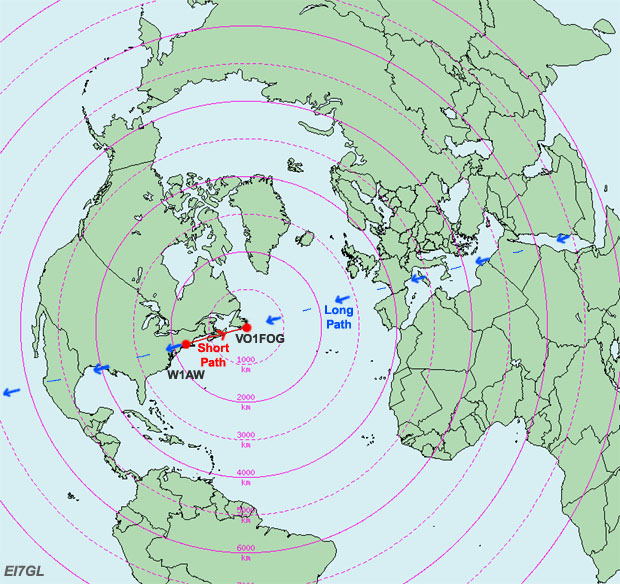 VO1FOG is located at the eastern side of Newfoundland, Canada and on Wednesday the 21st of December 2022, he was listening to the daily morse code practice transmissions on 18.0975 MHz from W1AW in Newington, Connecticut.

The distance from VO1FOG to W1AW at the ARRL headquarters is about 1,660kms and the direct short path signal was quite strong. However, VO1FOG was also hearing W1AW via the long path which means it nearly has to go completely around the globe. The long path is around 38,420kms.

VO1FOG was using a 3-element SteppIR antenna at 23-metres above ground level.

The advantage of this type of antenna is that the lengths of the elements can be lengthened and shortened by motors rather than having to rotate the whole beam. This means that VO1FOG can switch from short path to long path in about six seconds.

The image below shows some morse code signals from W1AW via short path.

The dots and dashes are nice and clean and the word ‘SAID’ can be clearly seen.

The image below shows some morse received via the long path.

The audio of the W1AW signal can be heard below. Remember that there is nothing wrong with the signal, you’re just listening to the same signal arriving in Newfoundland at different times.

This W1AW code practice…at time 0:31 my antenna is short path to W1AW; code is clean and clear. At time 0:42 my antenna is moved to LP. The code is virtually uncopiable when both sigs merge with a 127 ms delay. At 01:14 I am back at SP and the CW is clean again. pic.twitter.com/KPXsp6Xomj

VO1FOG reports that the test was done at 14:50 UTC. The approximate propagation conditions for W1AW’s location on 17m is shown below. 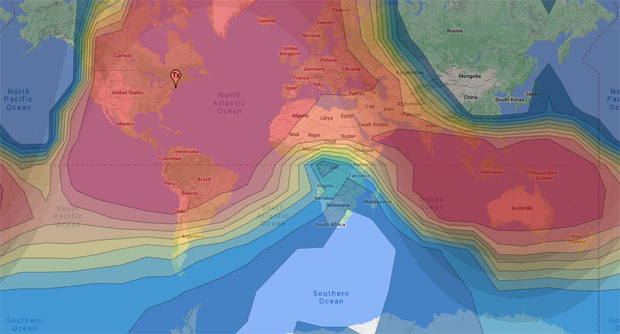 It’s interesting that the long path isn’t too far from the Grey Line path which is near where the sun is setting or rising.

Larry has carried out several tests like this recently and he reports that he hears both long path and short path almost daily about an hour either side of his local solar noon.

He has seen this echo effect on the 20m, 17m, 15m and 12 m bands and to a lesser extent on 10m. He did tests with K5WLT in Texas who was using 400w into an 80m dipole and the echo was seen on multiple bands on multiple days.

Larry usually does his tests by getting the other station to send the letter ‘E’ i.e. one-dot with a space after it. The image below shows the test with G0OVK in England when a second dot can be clearly seen. 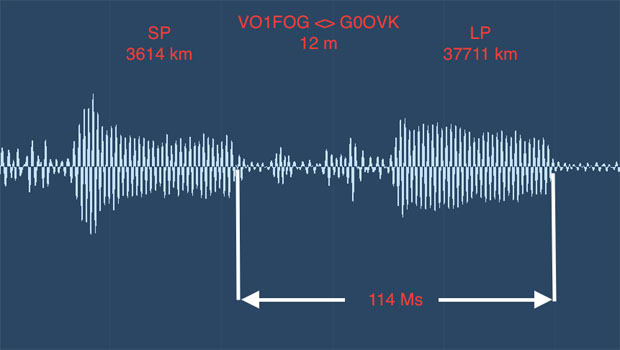 Analysis… With the rising solar flux, a lot of people are probably hearing strange echoes on SSB and CW signals and not realise what it is. It obviously helps if the transmitting station is running high power as the long path has to travel almost around the world.

When Larry sent me the information and as I was preparing this post, I couldn’t help but wonder if the signal from W1AW went around the globe for a second time? If the path is open and the signal goes around the world, does it keep going round and round the globe getting weaker and weaker each time it passes?

Is it possible to hear the second echo as the signal passes for the second time? Is it strong enough?

What about the time signal WWV on 15.000 MHz and 20.000 MHz? That produces a tick once a second, it should be possible to hear the long path tick as well. Again, is it possible to hear more than one echo in the space between ticks?

It’s intriguing to think that there may be signals from high power transmitters going around the globe multiple times before finally dying out when the propagation conditions change. Again, it raises more questions… how long? Up to a second? Several seconds? Minutes? That’s leads then to the subject of ‘Long Delayed Echoes’ which is another topic in itself.

If you have a good beam or antenna for the HF bands then have a listen and see what you can hear.

Thanks to Larry, VO1FOG for all of the background information for this post.