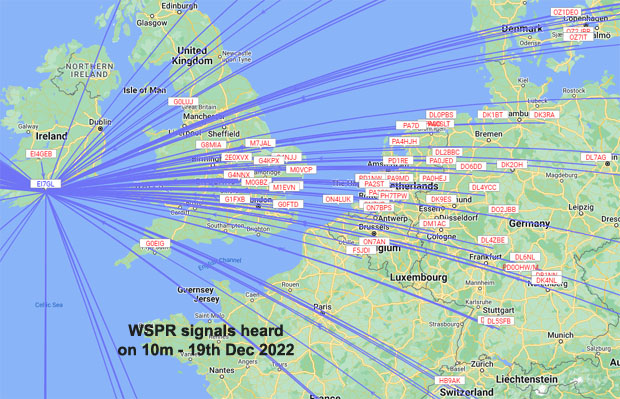 Normally the main Sporadic-E season normally lasts from May to August every year but there is also a smaller secondary peak during the Winter months. While I was listening for WSPR signals on 28 MHz yesterday, I noticed that there was a Sporadic-E opening on the band.

While this isn’t that unusual, what caught my attention was the fact that the skip distance was short for 10m and I was hearing stations in England. The map above shows some of the European stations that I heard on WSPR including a batch in England.

Most of these English stations were in the region of 500-700kms which is reasonably short and unusual. It’s much easier for me to hear say German stations during a Sporadic-E opening as they are around the 1200-1500km mark.

What alerted me to the short skip was the sound of the QRSS signals from England coming through on the WSPR frequency of 28.1246 MHz. 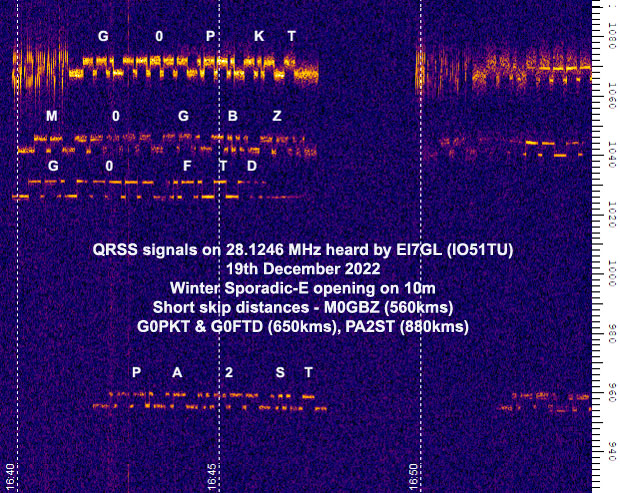 QRSS is a very slow form of morse code where a single callsign is sent over a period of a few minutes and the call can be decoded by looking at the audio spectrum on a screen. Signals that are up to 20dB below the noise level can be seen and in a way, this was the original ‘buried in the noise’ signal mode before the likes of FT8 and WSPR arrived on the scene.

In the example above, the 10m QRSS signals are about 500Hz below the WSPR signals and in the same audio passband.

It’s likely there will be more Sporadic-E openings on 28 MHz and 50 MHz over the Christmas period, have a listen.