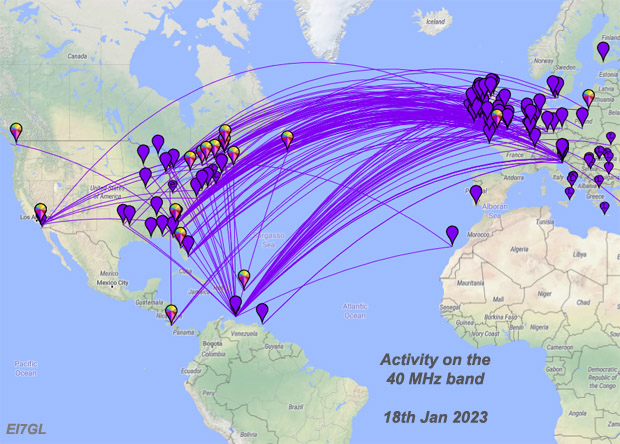 As the map above shows, there was plenty of activity on the 40 MHz band on Wednesday the 18th of January 2023. One of the pivotal stations on the band is Martin, PJ4MM in the Caribbean. With the high MUF due to solar activity, he is ideally placed to put a good signal into the eastern part of the USA and Canada as well as into Europe.

According to PSK Reporter, PJ4MM was involved in the three longest paths reported on the 8m band on the 18th.

Paul, G7PUV (G9PUV) in the SE of England reports… “My tally for this afternoon was heard and flagged by 12 US stations, 4 Canadians, PJ4MM and TI5N5BEK. I worked WM2XEJ, VA2CY, PJ4MM and heard WM2XAN plus had 22 F2 backscatter reports from Europe.”

This short video from Paul shows reception of WB4JWM/WM2XEJ ON 40.680MHz.

Patrik, 9A5CW reports the first contact on the 40 MHz band between Croatia and Bonaire, a distance of about 8419kms. 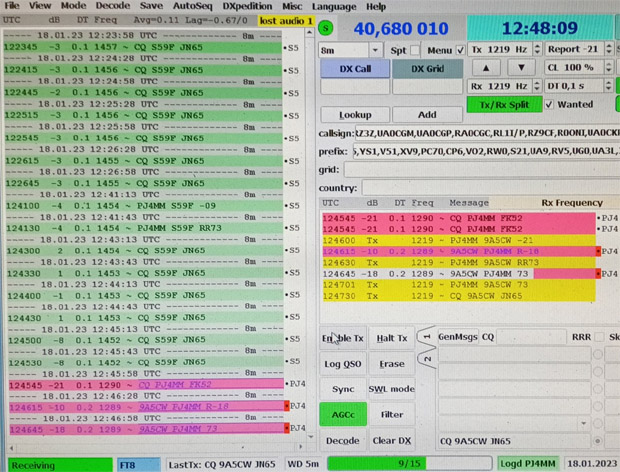 DX Cluster reports are at the bottom of this post.

All reports… All of the 40 MHz paths are shown below. I have removed BG0GE who was almost certainly reporting the wrong band. The WESSEXSDR seems to generate a good few bogus spots as well and I have marked these and other suspect ones with a question mark.